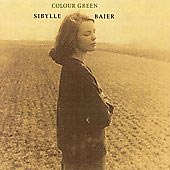 I’ve been accused of favoring winsome female folk artists when I do indulge the form (folk), and I guess I have to cop & say: OK, guilty as charged. At least until I find some fellas who are up to minimalist beauty and unusually dreamy, lonesome vibe of VASHTI BUNYAN’s “Just Another Diamond Day” or of my new favorite, SIBYLLE BAIER. Like Vashti, Ms. Baier was recording her skeletal voice + guitar beauties around 1970-73, but Baier never actually got that album out – in fact the material on “Colour Green” is just now coming out for the first time, 36 years later. (Apparently J. Mascis had a hand in its release). It’s fantastic, simple stuff, with no single track throttling any of the others around it – just achingly pure folk from start to finish. Baier was German, and it says somewhere on the web that she once contributed a song to an early Win Wenders film. She sings with barely any trace of an accent, and her voice just oozes sadness and somberness without ever dipping into cliché. If you want to try a single song, you can download “Tonight” right here. Everyone loves the half-baked story of the easygoing non-musician who just sat down one day with his/her guitar and knocked out a classic, but with Sibylle Baier there’s very something close to truth in the tale.
posted by Jay H. at 8:54 AM