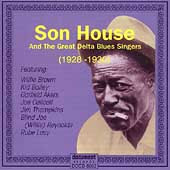 It’s been said before, and it’s been said before that it’s been said before, but it hasn’t been said enough: SON HOUSE was one of the most wildly inventive and brilliant musical geniuses of all time. His three two-part 78s from 1928-1930 are at the top diamond of the pre-WWII blues pyramid, rivaling only SKIP JAMES and CHARLEY PATTON for prime placement in the plaintive pantheon. I’ve found myself coming back to those three amazing compositions – “My Black Mama”, “Preachin’ The Blues” and “Dry Spell Blues” – of late, and finding it easy to do so thanks to the paradoxical virtues of CD technology. The best collection of his work, for my money, is the 24-track collection “Son House and The Great Delta Blues Singers – Complete Recorded Works (1928-1930)”. This is assembled in typical completist fashion by longtime UK blues archivists Document Records, and contains not only House’s complete works (including the unissued, post-mortem discovery “Walking Blues”) but those of 7 like-minded contemporaries like BLIND JOE (WILLIE) REYNOLDS and KID BAILEY.

You have to wonder how many incredible unrecorded blues classics were completely lost to history, given that these guys were generally documented at the whim of producers looking to make a buck off the “race record” market. Thus we are left with only two tracks in total from Patton pal WILLIE BROWN (whom I’ve discussed previously), the stunning “Future Blues” and railroad classic “M & O Blues”. It’d likely be like having “Lexicon Devil” and “Circle One” being the only surviving GERMS material; can you imagine what it would be like to later stumble upon “Forming” and the “(GI)” album? I suspect it’s not going to happen with Brown or any of his and House’s kin; that vein has been thoroughly drained as deep as it’s going to go. What I like about this collection is the fact that it’s not clogged with alternate takes and different versions – I know that pleases a lot of archivists, and often it’s a great way to gain insight into the creative process. But sometimes you just want the best of the best, the stuff that was agreed to be definitive at the time, and that’s what you get here. In fact, if different versions exist of these songs, I don’t know about them. This collection is as essential as any Yazoo assemblage, given the complete recordings of the aforementioned House and Brown, as well as the booming voice & slide guitar of Reynolds, the sole 1930 recording of slack-key master JIM THOMPKINS (“Bedtime Blues”), and other great works by pioneers GARFIELD AKERS, JOE CALLICOTT and RUBE LACY.

As an aside, one of the more interesting cultural archeology stories of the past 50 years is the epic 1960s quest & discovery of the original giants of blues by blues-crazed, eggheaded northeastern college students. You know what I’m talking about – the John Faheys of the world taking long road trips into the deep, deep south in order to go door to door, saloon to saloon, farm house to farm house to track down Son House and his brethren. I think it’s a pretty fascinating tale, and it pushes all my buttons in a positive way: the thrill of the chase, the clash of cultures, the birth of racial tolerance/respect, and of course, complete & total musical obsession. I’ve read some great articles about this, but is there a definitive, well-written book or resource that captures this story well? I’d appreciate any suggestions for further reading.