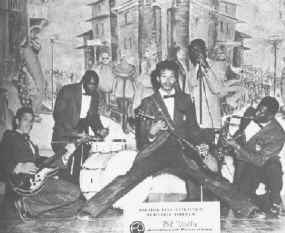 A case could be made – and I’ll make it right here – that this super-rare 1961 45 is one of the Top 5 wildest, loudest and best R&B records of all time. Now mind ya, I’ve never actually seen the record in question, but if you’ve gotten ahold of these two tracks by way of compilations like “WILD AND FRANTIC", “SIN ALLEY VOLUME 3” or Charley Records’ “SHOUT BAMALAMA”, you know that Otis Redding’s first foray into Little Richard-style shouting was as intense and as revelatory as Richard himself – with an even better, way more honking backing band. “Shout Bamalama” was made to sound like it was recorded at a drunken, insane house party, and it rocks so hard that one can imagine heavily splintered floorboards and a lot of 4am cleanup after the last hangover-bound dancers straggled home. There’s all sorts of whooping & shouting at the start, with Redding cutting in sharply to help calm the crazed throng down with a “Hold it, hold it, hold it, hold it now”. The surprise then comes when he unleashes a bracing, rasped shout of his own to kick off the song. Redding is just fantastic on the vocals; you just knew this guy was born to be a star after hearing this performance (even though he toned down his delivery significantly in the coming years). And “Fat Gal” rules as well – greasy uptempo R&B with hardcore horns, plinking piano & rhythm and bump-grindin’ movement to burn. “Shout Bamalama” pops up on all sorts of retrospective Redding compilations, but “Fat Gal” is a real tough nut to track down. I just found “Wild And Frantic” on CD via Norton Records’ mail order catalog and it’s got, no kidding, thirty-five R&B scorchers, most of them pretty hot. That’s 17 more than the original comp LP. If you haven’t heard the PINETOPPERS’ one and only contribution to vinyl, it’s not too late to make it your New Year’s quest to make sure you do. The payoff, as they say, is assured.

(UPDATE: I should have mentioned that there are two different versions of “Shout Bamalama” out there, and I’m not sure which is the original. The one I’m raving about appears on “Sin Alley, Volume 3”, but there’s a more restrained version yet with the same vocal track on the “Shout Bamalama” comp CD. I’m not sure which one is popping up on the Redding anthologies. Anyone know the story behind this?)