BRIDE OF SATAN SINGS THE BLUES.... 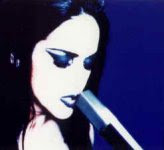 In 1996 I had never heard a single note of music played/sung by DIAMANDA GALAS, despite her having graced the cover of, as one Shorthand reader put it, my “beloved Forced Exposure” some years previously. Her Satanic banshee shtick sounded kind of interesting, but definitely not my thing at the time – all I "knew" was that she was the ultimate terrifying goth queen, with a voice that could shatter glass and an attitude that just dripped with condescension for non-MFA, non- uber-underground types. Then I actually sat down and read her interview in my beloved FE, and found to my surprise that she was actually a charming, intelligent, pretty cool, fun and happening gal that I wouldn’t mind partying with – with a terrifying goth persona and a voice to stop time and melt your face clean off. My curious then-girlfriend now-wife suggested that we see her play at Berkeley’s Zellerbach concert hall, and I succumbed and went along with my usual curmudgeonly not-my-idea stoicism.

It was easily one of the most intense and incredible performances I’ve ever seen. I don’t know what sort of turkey prep you were doing around Thanksgiving 1996, but I was instead sitting stunned in the rafters of Zellerbach, watching an immensely talented woman careen and zag from insane terror-filled shrieks to lilting, near-wordless beauty, all propelled by the same breathtaking multi-octave voice. As Joshua Kosman put it in a review of the same show we saw:

“…At the heart of Galas' artistry is her extraordinary vocal technique, a glorious grab bag of shrieks, croons, guttural growls and bravura outbursts of words. To hear a performer ride so close to the edge, dramatically and musically, and manage it with a technical proficiency that most operatic divas can only envy, is a rare and inspiring thing….. There's a long tradition, from Paganini to Robert Johnson, of performers whose art is so technically dazzling and so terrifying in its communicative power that they're reputed to have sold their souls to the devil. Diamanda Galas proudly continues that lineage.”

And that’s not the usual hyperbole. It was that amazing. She “covered” Son House, Johnny Cash, Willie Dixon, and a few standards that I’m hard-pressed to remember right now. To this date I’ve still never heard her on record or CD. I almost think it would spoil what I saw that evening, and there’s probably no way it could compare. (Sort of like hearing a studio version of a song you heard and loved on a live album first). She hasn’t come back since, but if she ever gets up the gumption to tour again, by all means – GO.