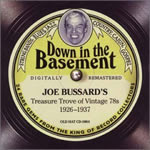 I’d never even heard of Joe Bussard until I read the recent Brett Milano book on record collecting, but it seems pretty apparent that this guy is one dedicated, record-hounding nut, for which I applaud him. He’s got all sorts of front-porch tales of his days in the 78rpm-gathering trenches, hopping from dusty town to town, crawling around moldy attics and knocking on seemingly impenetrable doors. For all his tireless hunting and gathering, he’s been rewarded with the lofty mantle of “King of the Record Collectors”, and the right to share some of his ultra-rare 78s with the world at large on an Old Hat Records CD. Let it be said that we are all very, very much the better for it.

“Down In The Basement” is a superb, 24-song overview of what you’d expect to find if you asked a well-informed collector of over a bazillion 78rpm records to pull out his best and/or most rare finds, particularly if the collector had a distinct bias toward old-tyme fiddle, string band and country music. Mind you, Bussard also digs “hot” jazz and early blues, but the majority of this comp lands square in the fiddle-breakdown camp, in keeping with Old Hat’s stellar releases thus far. It is fantastic, and a real revelation in parts. This guy dug up some true gems, starting with frantic breakdowns that bookend the compilation, the STRIPLING BROTHERS’ “The Lost Child” and GRINNELL GIGGERS’ “Plow Boy Hop”. The latter sounds like 10 insane, hooch-filled fiddlers sawing away in lockstep, and closes the CD on a mighty pleasing note. The early “hot jazz” numbers are great, too: BILL BROWN AND HIS BROWNIES doing “Hot Lips”, and FESS WILLIAMS AND HIS ROYAL FLUSH ORCHESTRA's “Hot Town” – both make me want to check out these early jazzbos and learn more about the genre. You’ll also be wowed by BLIND GARY aka the Reverend Gary Davis’ gospel blues “You Got To Go Down”, which is pretty much the only widely-heard number on here. Davis’ likely misinterpreted admonishment to wives, “You got to learn how to treat your husband / You got to go down” will certainly be winning him male fans for years to come.

UNCLE DAVE MACON appears on a lot of similar compilations, and I love his “Uncle Dave’s Beloved Solo”, which starts out with Macon telling his invisible audience, “Well, you know how much I love to sing about the bible, and how much I love to go to choich”. There was a time – not that long ago – when people actually pretended to enjoy these things, folks! Finally, though at least two-thirds of these numbers have a good tale behind them, I want to note the DIXON BROTHERS’ “The School House Fire”, which may be the most morbid and horrifying song of sorrow you’ll ever hear, a jaunty ditty about little children screaming as they burn to death in front of their parents, sung in joyous harmonies with a nice lilting banjo. Gotta hear it! Fantastic CD, and it comes with a gigantic, beautiful color booklet with many of Bussard’s better collecting tales, reproductions of some of his records, a ton of photos and even his take on “this rock nonsense”.