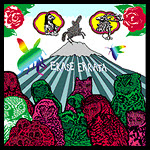 Very nice follow-up to 2002’s heralded debut “Other Animals” CD from noise-loving, all-femme quartet ERASE ERRATA, a band who justly earn at least half the hype thrown their way. If the first one was a raucous mess of trumpet-fed NYC no wave and Gang of Four-style skeletal bashing, the new one broadens the palette a bit to include some underhanded nods to The Minutemen, “Pornography”-era CURE, long-forgotten trumpeting Dutchmen the Dog-Faced Hermans and a more obvious lineage to Teenage Jesus & The Jerks. And what do you know, Erase Errata are building on their heroes to stir up a sideways-slanted, creepy-crawling stew that’s very 2004 – not a collection of homages – and maybe the best CD I’ve heard this year (all 5 weeks of it). You fans of thumping, fast-paced early 80s female artpunk – and if you’ve read the blog before, you know I’m one of ‘em – will find a new heir to get your jittery groove on about if you’re not there already.

Each track has got a different method of grinding out atonal, densely packed rhythms into fidget-worthy dark funk. I think I can boldly assert that it works better on some tracks than on others. The band’s taken a few of their manic tracks from past comps and 45s and redone them here, with the almost pop “Let’s Be Active” coming off the best & only “Harvester” being taken down a notch – the original was far more interesting & fun to listen to. Yeah, my one beef with Erase Errata is the haughtiness and slight pretension that weasels its way into every 5th track or so, as typified by the re-work on “Harvester”. Sometimes the abrupt time signature changes or artful vocal liberties sound stiff, forced and unnatural, like they figured out that they’d retain deep underground street cred only by deliberately complicating and fucking up their own song. But since I couldn’t songwrite my way out of a wet paper sack, what the hell do I know. There are numbers like “Ca. Viewing” or the whomping “Flippy Flop” that ought to make any broad-minded rocknroller’s top tracks of the year. But pundits will always have their differences: one wag on Amazon.com wrote “this is good, but they’re no Scissor Girls”. Hey now: who is, buddy?