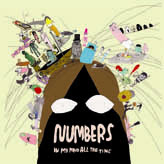 It’s always hurtful to watch your heroes take a tumble, isn’t it? That’s my none-too-subtle, none-too-original entry point into the overwhelming and unmistakable conclusion that this second CD from San Francisco’s once-hallowed NUMBERS is one big steaming waste of time. Sophomore slump my eye – they just flat-out forgot how to write a clever tune while they frolicked and basked in the considerable shadow of their fantastic 2002 debut “Numbers Life”. That was by leaps and bounds my favorite new record of that year – a stunning no wave/dance/garage punk hybrid that beat all comers with 10 examples of needle-sharp ninety-second synth/guitar rawness, with minimalist hooks and swoons to spare. Not a duff track among them, honestly, and the thing didn’t even make it past 20 minutes, so naturally I was starved for more. Yet the writing was on the wall after a few EP and comp track thuds, and “In My Mind All the Time” proves you can definitely shoot your wad in under 20 minutes and then go limp for two solid years.

After the first couple of disappointing spins I tried to approach this like I was hearing NUMBERS for the first time: perhaps then I could see some redeeming value if only I could pretend they were some smokin’ new trio whose debut landed in my lap. Sure enough, I honed in on a lonely two tracks that are hot hot hott like the debut: “Drunk With Pain” and “Product Lust”. But man, some of the others are just plain abominable. Did anyone see the spelling bee documentary “Spellbound”, featuring ultra-nerd Harry Altman speaking to the camera in an exaggerated 1950s “Lost In Space” robot voice? You just cringe for the poor kid because you just know he’ll be getting his ass kicked up and down the neighborhood for the next 5 years. It’s the same “let me help rescue you” feeling I have for Indra from Numbers, who will hear her own ridiculous Kraftwerkian robot voice projected back to her in 2015, and wonder what the hell she was thinking. There’s even a brief electronic interlude called “We’re Numbers” in which the band introduce themselves individually (“I’m Dave”), etc., har har – maybe a tolerable but ultimately embarrassing device they could maybe use to start a show, but completely & totally unnecessary to record and release. Another clunker is called “Danceattack”, a title that may have been arrived at by a random title generator fed by all the raving reviews the band got for “Numbers Life”. I suspect the title generator will be a little less full this time around, and I don’t expect too many of my digital-punk-lovin' peeps to disagree with me.