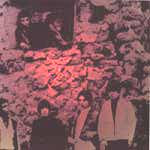 Also meeting the bootleg litmus test established below in my CAN review is this collection of odds & ends spanning many years of, and illustrating many tectonic shifts within, Mr. ARTHUR LEE’s rock and roll oevre. Like try 31 years! Starting with a pair of terrific instrumentals from 1963 by Arthur Lee & the L.A.G.’s: “The Ninth Wave”, which rips off a riff from “Baby Elephant Walk”, and “Rumble-Still-Skins”. Next we move to the hully-gully 1964 sounds of The American Four, with their rip-offs of both “Green Onions” (“Soul Food”) and “Twist & Shout” (an excellent stomper called “Luci Baines”). Other tracks are offered up on which Lee either sings or wrote, including the girl-group tearjerker “My Diary” by Rosa Lee Brooks, on which one Jimi Hendrix is alleged to be playing guitar.

The meat of the disc comes from 10 tracks that made up an unreleased 1973 by Lee (as LOVE, perhaps?) called “Black Beauty”. A little research on “the Internet” would probably reveal a great story as to why this record never saw a day’s light, but I’m feeling like guessing instead. Perhaps it’s the record’s way out-of-character, tuff BadCo/ Grand Funk-style boogie thunder? What about the funky calypso “Beep Beep”? Maybe that wasn’t primed for any rack jobbing in 1973? I don’t know; it probably comes down to the usual problem of sub-standard material being dropped off at the record company’s doorstep, and their perception of a surfeit of supply to meet a miniscule demand. Not that the record’s without its charms, Lee’s wild-man-of-loincloth-rock vocals notwithstanding. “I Got To Find It”, reminds me a bit of a Hendrix-ized “Oh! Sweet Nuthin’”, and the closing “You’re Just a Product of the Times” (what a classic LOVE title!) is heavy heavy heavy. But wait – after “Black Beauty” there’s even more. “Give Me a Little Energy”, an unreleased acetate for the 1977 “More Changes” LP, sounds both lyrically and content-wise like Rob Tyner rallying the great unwashed at a 1968 White Panther rally – just acoustic and very short is all (1:44). Finally, there’s two versions of an unreleased track Lee recorded with the well-monikered BABY LEMONADE in 1994 that’s actually pretty smokin’ psych-punk, with Lee’s astral vocals returned to their rightful place in the mix. The man has been through so many highs, lows, and in-betweens that if you’re at all interested in filling in some of the gaps of this mystical cat’s career, this is a healthy puzzle piece to track down.