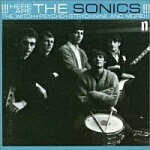 1960s garage punk was very much a 7-inch single-intensive genre, given the exceptionally brief careers and limited bank accounts of the many fine teenage bands of the golden 1965-66 era. As I’ve pontificated about before, the number of quality, non-compilation “garage punk” LPs during this brief heyday surely numbers as a single digit. Topping just about everyone’s list is the debut from Tacoma, Washington trailblazers THE SONICS, the loudest, most whompingest combo of their day. I just bought the CD (“with extra tracks”), and it, as expected, once more confirmed the record’s place in the pantheon. I don’t feel the need to go into too much blather about The Sonics’ approach, save for a nod to Gerry Roslie, arguably the blackest white man ever to let loose a blood-curdling, primal wail in the course of rock and roll servitude, and those drums – brought up way, way to the front of the mix and blasting sharp, exacto-precise beats to complement the crazed riffage screaming around it. The originals are a cattle call for killer 1960s Valhalla punkage: “The Witch”, “Psycho”, “Strychnine” and my all-time favorite, “Boss Hoss”.

Is the album perfect? No. The preponderance of covers and a few OK non-Roslie vocal turns keep it from being, say, “Easter Everywhere” or “The Velvet Underground and Nico” (to name a couple of just-about-perfect 1960s contemporaries). But some of those covers are so outrageously wild and loose – like “Do You Love Me” and “Have Love Will Travel” – that they’ve become the de facto, definitive versions for me. Can you imagine a 1965 Tacoma sock hop with these guys as the band blasting it out for your date-night shenanigans? “No honey, I think I’d rather stay and watch the band”. The extra tracks, two of which are about Santa Claus, are worth missing. And finally – as an aside – there’s a Sonics LP that’s been in my collection for a while called “Full Force” that’s absolutely friggin’ amazing – a raw, HOT remix of all the best Sonics tracks from their two LPs, overloaded into the red and just melting the vinyl on which it resides (quite literally – the first track on each side is unplayable due to a heat warp). Anyone know the story with this one? Are these versions on CD anywhere? I would submit that it is THE Sonics record to get if you can get just one – and since you can get two, “Here Are The Sonics!!!” is essential, and a masterpiece for the ages.