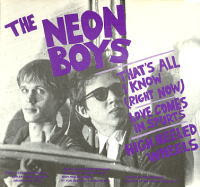 I plopped this on yesterday for the first time in a good many years, and was reminded again what an incredible, top-tier rock and roll masterpiece it is. It got me all hopped up to let you know about it, in case you were somehow unfamiliar & in need of a new breakthrough. Rather than write up a whole new spiel on it, I consulted my archives and found that I’d written a thing on it in 1997 as part of a bigger list of the greatest 45s of all time (!). This one clocked in at #13. Here goes my Clinton-era take on the NEON BOYS, slightly edited for grammar and content:

"I’ll make an allowance for this posthumous release on our list, as it contains one of the all-time great “love” songs, “That’s All I Know (Right Now)” and should very well have been a single in its own right. The Neon Boys were a precursor to the mighty Television, and recorded three known songs back in 1973. The line-up was three-quarters of the original Television as well: Richard Hell, Tom Verlaine and Billy Fica. The session was remixed and put out around 1980, a time when a market for independently-released 7” singles had fully developed and could now support what I’ll bet was a frothing demand for these tapes.

The songs are as close to near-perfect as any of the original recipe NYC proto-punks ever came, full of vigorous hooks and the clanging guitar interplay that became Television’s trademark, with a dollop more teen frustration and aggression than anything that band ever released. Hell and Verlaine, both gifted with incredibly distinctive and malleable voices, harmonize (in a manner of speaking) together on an early version of “Love Comes In Spurts”, and then hit the upper registers of chord-dom as the verse/chorus/verse structure splits wide apart. The song bears virtually zero resemblance to the song that kicked off the first Richard Hell & The Voidoids LP four years later. It seems that Richard Hell blessed both his non-Voidoids bands with their best material; an argument could certainly be made for Hell-era Television and Hell-era Heartbreakers hitting their respective peaks with him in each band. Ironic indeed that the Voidoids, decent as they were, never came close to the fire of the aforementioned, and this record’s B-sides of “Don’t Die” and “Time” (recorded in ’79 or ’80 as Richard Hell and the Voidoids) are poignant and nice but not outstanding. The real treasure here is the Neon Boys, who we can only hope have a box of tapes stashed somewhere awaiting a big fat cash-in!"

One last thing (this is me speaking in March 2004 again): I once played a cruel joke on my most rock-knowledgeable peer by making him a tape of “lost” 1973 Neon Boys recordings, which actually ended up being some dumb prank calls a la Gregg Turkington, Tube Bar, Patio Tapes, etc. I took my inspiration from great Forced Exposure scumbait pranks of the past, such as the legendary “Bullshit Summer” EP by the Lazy Cowgirls and some nonexistent Mission of Burma record I remember salivating over. I labored long and hard over my fake Neon Boys titles, such as “Teresa Says” (copped from the “Meet Teresa Stern” short film that Hell & Verlaine made together in their wild youth) and others totally derivative of Television titles. My wacky, unfunny stunt backfired and profoundly failed to amuse its victim – a testimonial, I now see, to how friggin’ great it would be to REALLY hear more Neon Boys material than what’s available on this EP. Someday!