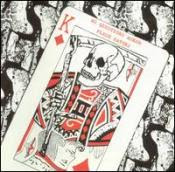 As I’ve probably mentioned at least three times too many on this site, The FLESH EATERS are one of my landmark, worldbeating, Top 5 rock and roll bands of all time. There are a knotted cluster of us out there who will concur with such a bold, unpopular assessment, all of us continually scratching our heads as to why so few seem to share a passion for what is, arguably along with THE FALL, probably the best band of the hallowed late 70s/early 80s period. Hope for company springs forth in the Atavistic Flesh Eaters reissue series, which began a few months ago with the CD release of the band’s first record, and continues this September with the CD reissue of their last (“Hard Road To Follow”). With the genius “A Minute To Pray, A Second To Die” thankfully in print for a few years now, that leaves only the wailing, gnashing, heavy metalloid deathpunk 3rd album “Forever Came Today” completely out of print and unavailable for mucho deserved critical hosannas. There have been rumors of certain labels stepping up to the plate to right that wrong, but I’ve yet to hear final word that someone’s truly giving it a go.

So here we are with the 1980 Flesh Eaters debut, “No Questions Asked”, packaged with their debut 7”EP “Disintegration Nation”, three tracks from a the awesome Chris D.-helmed LA punk compilation “Tooth and Nail”, and three more rare demos procured from the teeming Flesh Eaters tape collection of Byron Coley. Is that friggin’ great, or what? And it’s funny, I feel after listening to this complete package a few times that I’ve probably never given “No Questions Asked” the stand-alone respect it deserves. Sure, I’ve always loved the thing and played the grooves off my LP – there’s nary a duff track on here (I even like the fake dub of “Cry Baby Killer” most of the time), and it’s a blistering bag of hot-tempered, raw LA punk rock with understated guitar and the LP-length debut of Chris D.’s award-winning hothouse vocals. But of their four records, it was always my fourth favorite due to its cobbled-together, multiple-lineup nature, which renders it a bit scattered when stacked next to the cohesive, major-league whomp of the other three. “No Questions Asked” takes a bunch of different Flesh Eaters live lineups from 1978-79, throws in a few LA punk/new wave-era heavyweights (Tito Larriva, Stan Ridgeway, Karla “Mad Dog” whatever her name was) as “session” musicians, and where it suffers at all, it’s in the lack of sheer rocks-out raw power that they made into a trademark just one record later. But man, the proverbial apples and oranges, right? It’s just an incredible slasher of an album, with all-time killers like “Police Gun Jitters”, “Dominoes”, “Crazy Boy”, “The Child Comes First” and the razor-sharp title track. It’s a “punk” album very much in keeping with its era and peers, but something about it speaks to a whole ‘nuther musical/lyrical language being shaped and articulated by Chris D., a guy who comes about as close to a “poet” as any hard-drinking 70s punk ever did. In other words, in reading his lyrics, I find little if anything to be embarrassed about; on the contrary, there are some wild, feverish verses on here that speak to a man with a bizarrely fascinating and ultra-imaginative mind, and the means to assemble it into spat-out word clusters that make a crazy sort of (non)sense.

It goes without saying that the previously-unavailable debut 7” and comp tracks are incredibly additive to the package and to your life – the song “Agony Shorthand” from the 1978 single is, that’s right, from whence this blog takes its name. “Twisted Road” and “Disintegration Nation” are also among the all-time top early ’77-’78 punk songs, and now you can get them into your house without having to pay Bleeker Bob $100. And the until-now lost demos? Hallelujah! Apparently these three – “Disintegration Nation”, “Agony Shorthand” and “Twisted Road” – were recorded with a 45 in mind, and had such a single actually come out it would likely be hailed by geeks years later as a super-raw, unkempt KBD/DIY masterpiece. I prefer the versions that actually did make it out, but these three are primal and loud and a little weird in their less-than-developed structure. Fantastic to hear it. This package is just the thing to get you warmed up for September’s “Hard Road to Follow” reissue, but even if you mistakenly skip that, you definitely need to get intimately involved with this one.