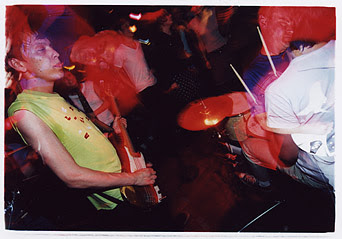 Big night of moderne-era loud-ass rock music at the Hemlock this past Saturday night. I was there with my clipboard, spiral notebook and digital voice recorder, and laid down the following observations. First up were Norway’s EPIKURS EUPHORIE, who slam-dunked their opportunity to fully play to Norwegian rock stereotype by coming out in full church-burning Black Metal makeup and clothing. These lords of chaos kicked up a terrible, TOTAL SHUTDOWN-like racket, with a singer given to screeching like a poisoned owl, and a band humping & thumping away in tandem. Noisy, chaotic, and not at all crafted with love in mind. It was generally agreed that their best songs were the short ones, and the very best song of them all was the last one. Middlers THE SIXTEENS were a trip: three 1982-style new wavers, all with asymmetrical haircuts and a stage full of synths & patchcords. If one of them had busted out some clove cigarettes it would have been a totally appropriate move. As it was, the female singer insisted that the house lights be shut off so she could dance around SIOUXSIE-like to a strobe light, complete with some fucking awesome robotic gothgirl moves straight out of the Batcave 101 textbook. Did I mention that they were a pretty hot new wave band? If you’ve got any patience at all for loud, drilling, VIRGIN PRUNES / XMAL DEUTSCHLAND-style aggressive synth music, The Sixteens just might be right up your proverbial pipe. As middle bands go, this was a good one.

But predictably, the evening belonged to Seattle’s A-FRAMES, who have now reached enough critical mass at this point to have their “hit” song titles screamed out by the pleading crowd (for the record, the hits are “Crutches” and “Hostage Crisis”, both of which were played as reward). Live, the A-FRAMES come on far more ballistic than on the recent (2nd) CD, far more like the crunching 45s than the more glassy, opaque punk of their last CD. This is a band who’ve honed their chops to become one of the tightest, most slashing & put-together rock and roll trios around. Just about every number was a ninety-second knockout, and only the first two registered as new, unrecorded songs I hadn’t yet heard. The bass player, whom you see pictured here, has the most whomping, throbbing, amped-up bass sound you’re going to hear this side of Lightning Bolt. He’s sort of the Rob Vasquez of his instrument – no one plays like this guy. Patent it! And the A-Frames’ taste is unimpeachable, what with an ending encore of the Australian’ X’s “Batman”, played very fast and so dead-on you’d’ve thought they’d traveled to 1979 Sydney to learn it firsthand. Kids went nuts, some half-hearted slamdancing occurred, and I tucked in way past my bedtime. I’d see these guys play again in a heartbeat, and I recommend them with 5 friggin’ gold stars should you also get the opportunity.