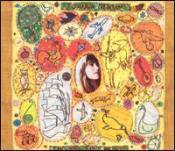 Are you in the mood for some of the most polarizing, initially excruciating and yet ultimately most lovely “indie” music of our brief millennium? I sure was when I decided to plunge into this. By all rights, I should probably have a big problem with JOANNA NEWSOM, as I’m sure many of you will (or do). On a bad day this could come off as cloying, pixie-like, mewling folk unswervingly determined to put forward a “cuckoo” persona (something one might also suspect fellow traveler DEVENDRA BANHART of doing). What one might call an “I’m-So-Weirdist”. That’s a term my college pal Brett coined for the drunk alterna-girls in our school who’d pop off with bizarre nonsequiters and then try and redeem themselves by exclaiming, “Oh my God, I’m so weird”. Yet I’m totally fascinated by this woman’s beguiling blend of baby-voiced vocals, fantastic/poetic wordplay, and off-kilter harp strumming and piano plinking. That’s harp as in HARP, the big golden thing that you sit down to play while wearing dark flowing robes. Newsom is the latest DRAG CITY chanteuse (see EDITH FROST), and fits in well with that label’s longtime outsider/oddball ethos. You don’t just “make up” a persona this wacky in a vacuum if you don’t already have the songwriting abilities to flesh it out, and make the goofy parts irrelevant.

Newsom comes across as a classically-trained, well-read, wide-eyed naïf who loves spinning grandiose, big-hearted shanties and romantic tales of kooks and old-timers. The vocals will take some getting used to, but unlike another indie act with high-pitched baby vocals (anyone remember New York City’s otherwise right-on early 90s band SMACK DAB?), Joanna Newsom is able to transcend them pretty quickly and actually charm the pants off ya when your guard is down. Newsom knows her Alan Lomax from her Harry Smith as well, and her harp and piano accompaniment treads down a very Americana-like path while remaining ghostly and quietly beautiful in a very unique, almost druggy manner. You may even find yourself chortling at her lyrics, and I mean that in a good way – she’s got quite a way with words, this one. “The Milk-Eyed Mender” was dubbed in one quarter as “avant-garde American music for the back porch”. Fair and accurate enough!

PS – Interesting tidbit: Ms. Newsom is a cousin to San Francisco’s new mayor Gavin Newsom, the bane of gay marriage haters and self-styled radical/progressives across this city of mine. It’s been funny watching her try to squirm away from that fact in interviews I’ve seen. Being associated with The Dashing Young Yuppie Mayor is, like, the height of uncool for the lefty rocker crowd, and Ms. Newsom knows well who’s buttering her bread. “Cousin? What? I don’t have no cousin!”