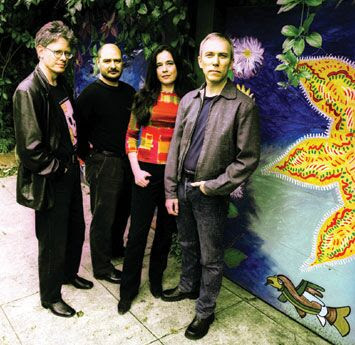 Entering the cavernous halls of this highfalutin concert hall last Friday night, I overheard one guy riposting to another, “Yeah, you know, Kronos are always going to get more people coming to their shows than anyone else in ‘new music’. I mean, they’ve got purple hair, they wear matching outfits, and they cover Jimi Hendrix...” Never mind in the five times I’ve seen them I’ve never spied any purple hair, nor heard any Hendrix, but I will admit the outfits are smashing. The guy’s got a point: longstanding string-benders the KRONOS QUARTET are for people like me who are treading lightly when it comes to the glorious catch-all term “new music”, and who are more apt to approach something that attempts a bridge with those musical worlds we do indeed understand. For the uninitiated, let me refer you to snippets from their All Music Guide biography:

“Few groups so successfully bridged the gap between classical and popular music as the Kronos Quartet; expanding the parameters of their repertoire to include compositions from rock, jazz, and world music, the New York-based artists recorded a body of work virtually unparalleled in its dedication to innovation and range of expression……the Kronos Quartet was formed in San Francisco in 1973; though all four members were classically trained, they quickly dispensed with the rigid formalities of their craft, performing their chamber music with all of the impassioned energy commonly associated with rock — even their casual dress flew in the face of the classical establishment. Although Kronos began recording during the late '70s, they began attracting widespread notice during the middle of the following decade as a result of recordings like 1984's Monk Suite (a collection of classical performances of compositions by Thelonious Monk and Duke Ellington) and their 1986 eponymous Nonesuch label debut, which raised many eyebrows via its string quartet cover of Jimi Hendrix's "Purple Haze."....

So there it is. Chamber music for the hoi polloi. My wife is a huge fan, and we see them every couple of years, each performance wildly different than the one before it. Last Friday’s night’s performance was entitled “Visual Music”, and included film accompaniment of all sorts, including experimental cut-ups & loops along with more traditional clips (even a little Bugs Bunny). Kronos played pieces from everyone from STEVE REICH (“Pendulum Music”, which was a series of feedback pulses between swinging microphones and amplifiers) to TERRY RILEY (“One Earth, One People, One Love”, a beautiful and moving set of film-like trance music that was my favorite of the evening) to Icelandic pop band SIGUR ROS. A Theremin and spooky keyboards were played to augment a string performance of “The Day the Earth Stood Still”, with the band played behind a screen projecting a simultaneous film of them kicking out the exact same composition. Hard not to be impressed. When I read the program on Friday night and saw just where the Kronos Quartet travel to play their multi-faceted musical presentations in a typical year (Reykjavik, Jerusalem, Buenos Aires, etc.), I have to admit I got a little jealous and pondered dying my hair purple and learning how to play a stringed instrument. That, and the fact that these four appear to be hipster culture mavens flitting around the edges of just about everything: film, art, international/ethnic music, rock and roll, sound experimentation, and what we once called 20th Century Classical. Sounds like a rich life to me, but I reckon it’s probably too late to change careers. In the meantime, if you can scare up 40 bucks next time they come to town, it's likely to be a night out you'll enjoy AND pat yourself on the back for.