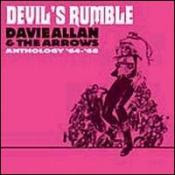 After years of wild-eyed record accumulators denying themselves food, drink and earthly pleasure in search of an exceptionally scarce and dwindling set of 35-year-old recordings, the definitive DAVIE ALLAN & THE ARROWS collection has finally arrived. And Sundazed, the label who hath brought it forth, just about nailed it, too – I really can’t imagine there being a better thought-out collection of his recordings than this. “Devil’s Rumble” takes large chunks from his four official LPs, just about all of his 45s, and heaping scoops of tracks from his many biker soundtracks (“The Wild Angels”, “Devil’s Angels”, “The Glory Stompers” etc) and spreads them over two CDs (if there’s a complaint it’s that each CD only has about 40 minutes of music, which leaves about 68 minutes that could have been filled with maybe 20 additional tracks from his 1965-68 glory years). For those of us who first heard Davie Allan and the Arrows and the all-time classic “Blue’s Theme” on that Savage Pencil “Angel Dust” biker rock picture LP from about 15-20 years ago, it’s been a long-ass wait to get deeper into his recordings. Apparently there were many complications even back in the day in getting his music out there in a complete and representative package; the liner notes tell stories of chunks of Arrows on misbegotten soundtracks, weird overdubs and remixes, and lots of contractual BS that kept Allan from really building the rep he deserved as an innovator and guitar genius. Let me elaborate.

Allan, it’s been said, was the missing link between heavy-reverb surf music, early garage punk and psychedelic acid rock. This is all by virtue of one incredible set of fuzz pedals and a guitarist who at times was able to out-Link Wray LINK WRAY as he strode for new sonic vistas in heavy, loud, parent-scaring instrumental sounds. In fact Wray is (to me) Allan’s only true contemporary in really hardcore fuzz/squeal pedal-hopping. If someone could be said to have invented “biker rock”, whatever that is, it’s this guy. The “Devil’s Rumble” collection takes us through Allan and his band’s evolution from a slightly snottier version of THE VENTURES into their hallowed era of fret-scrambling, gnarly instrumental punch-outs, one after the other. Mike Curb, the famed producer, SoCal svengali and former California Lieutenant Governor, saw just how perfectly this music slotted into Roger Corman-esque films of dope-eaters and cycle fiends, and Allan’s career as a low-rent soundtrack kingpin was born. But who really buys and hangs onto soundtracks, outside of soundtrack freaks? I think I might have about three or four somewhere, one of which is “The Wild Angels”, a great document that is pretty much owned by Davie Allan and The Arrows in various incarnations. It’s all here – “Apache ‘65”, “The Devil’s Rumble”, “King Fuzz”, “Cycle-delic” etc., as well as a handful of non-pounders that sound like Henry Mancini’s lost brown acid trip (“Scratchy”). And yes, for those who’ve been salivating, the beatnik central casting anthem “Bongo Party” made it on here as well. Great comp, certain to be one of the best reissues of 2004.