HEROES OF KIWI ROCK THAT EVEN THE KIWIS DON’T KNOW ABOUT, PART TWO : THE KIWI ANIMAL.... 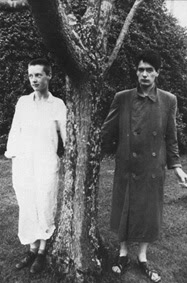 And until just a few weeks ago, THE KIWI ANIMAL were a lost 1982-1985 band that I didn’t know a thing about either. Their gorgeously lilting and intelligently weird folk LP “Music Media” is just fantastic, a discovery that it’s hard to imagine finding out about just now. Not long after this time there was a slew of hype about obtuse New Zealand pop bands, with The Clean, the Tall Dwarfs, the Chills and Verlaines getting most of the attention this side of the Pacific. But The Kiwi Animal? Never heard of ‘em. And along with The Clean EPs, Bill Direen's many records, The Gordons’ first 7” and LP, and perhaps the Shoes This High 45 I wrote about last week, “Music Media” would have to top any list I’d compile of the best the talented two islands put together in the 1980s. Or ever. Brent Hayward, coincidentally enough, was in Shoes This High before joining forces with Julie Cooper to start The Kiwi Animal in 1982. I’ll spare you the biography – an excellent site on the band which explains all can be found by clicking here.

So mind you, I’ve still never heard their first 45 nor their second LP, but “Music Media” – wow. I’ve listened to this more than anything else for 5 weeks straight now. I keep thinking that BARBARA MANNING’s well-known affinity for New Zealand pop music had to have started here, as the strange echoes, baroque instrumentation and the uplifting sweetness of Cooper’s vocals have many parallels with Manning’s debut LP “Lately I Keep Scissors”. It is not all sweetness and light by any means – there’s a real nasty undercurrent to a lot of the tracks on here, suggesting something sinister and dark lurking in the minds of these two, carefully camouflaged by sparse instrumentation and lovely vocals. And you certainly can’t beat those accents. When Julie Cooper is not singing, Hayward is talking over their folk-cum-acoustic rock music, like on the pulse-quickening political murder tale “Assassin” or the pseudo-pornographic “Making Tracks”. These slot in very well between Cooper’s more spectral (the incredible “Time of the Leaves”) and sometimes buoyant tracks (“Every Word is a Prayer”), making this a carefully crafted, every-track-a-winner LP. Don’t see too many of those anymore. Even the ringing guitar instrumental “I Love You” (awwww) is a doozy. I can’t say enough about this record. The guy that turned me onto it will surely be rewarded by Our Lord in Heaven.

There’s some great news. A label called Pehr is going to throw both of The Kiwi Animal’s LPs onto a single CD, slated for release this winter. In the meantime, they have free downloads of two of “Music Media”’s quieter and more prettified tracks, “Blue Morning” and “Just How Close”, both of which are great. If these two kick out the haunting folk jams for you, I’m pretty positive that the full CD will really knock you for a loop.