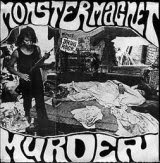 I dug this 45 out from under a ton of rubble and detritus in my garage this weekend, in hopes of recapturing whatever magic I heard in it when it first came out in 1990. I’m too lazy to look up the review I wrote on it in my then-fanzine at the time, but I’ll bet I told a whopper of a tale about blazing wah-wah, screaming guitar fury, the second coming of the Stooges blahdy blah blah. Just LOVED this band’s first two singles when they came out (“Lizard Johnny/Freak Shop USA” got a spin last year and I’m proud to say it held up). So what about now, hunh? Well, let’s take it from a couple of angles. First, the band’s record label is called “Primo Scree”. Please allow me the opportunity to say “that is so gay”. Second, there’s a big sign on the front sleeve that says “Drug Rock”, right next to the photo of some hippie who’s just shot someone dead. Drug Rock. Pardon my French, but that’s a little gay as well. (I mean gay as in happy).

Vocals, too, are more than a little over the top: “well I awwwlwayz trah ta do tha right thang bayyy-bah” etc. I guess you gotta remember that Mudhoney had been blowing a lot of minds during the previous 18 months, mine included, and this sort of Arm-esque vocalizing was allowed – nay, encouraged – at the time. Look up the 1990 indie punk rulebook, you’ll find it under rule 3:16, I promise. What I still really enjoy about this record is the actually understated feedback and wah-wah (at least on the a-side) – “Murder” really does have a distant, murky, lo-fi, almost dangerous feel to it that still sounds terrific. “Tractor” is more heavy screech a la “Loose” or ”TV Eye”, but both tracks are pretty smoking. Maybe because the recording quality is sub-optimal, it doesn’t stray into the jukebox hero arena metal these guys later became famous for & instead sounds like a scary piece of underground punk rock vinyl from an bygone era when new 45s could still be pretty fucking exciting. If it came out today no one would hear it nor care, but this one was heralded pretty unanimously upon release ways back. Nice to hear it retains at least 50% of its luster fourteen years on.