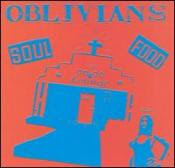 There’s a small pack of bands from the fertile early 1990s garage punk crowd already approaching “legendary” status in the minds of the next generation of 3-chord rev-it-up bashers. Is this too soon? Not for these kids – for them The Oblivians of 1993 are just as distant a memory as, say, The Electric Eels were for me when I first heard them in 1986. Certainly you’d have to include THE GORIES on any short list of 1989-95 ham-fisted garage legends, a band in a class by themselves even when they were around; maybe SUPERCHARGER (then again maybe that’s just me), and likely THE OBLIVIANS (who I’ve seen some folks unabashedly refer to as the germinal wellspring band from which all moderne slashing garage punk emanates). I’ll go along with that, why not, and continue making my case for the CHEATER SLICKS and NIGHT KINGS along the way. I was fortunate to see The Oblivians near the end of their life (with so-legendary-it-hurts 45rpm superstars THE BRIDES), and they were flat-out, no doubt about it fantastic. This collection of the early 45s and a handful of lost tracks is for me the place to go first vis-à-vis the band.

Their modus operandi was crude, basic, R&B-influenced pounding that nodded in the direction of the church while staying rooted in the beer can-filled gutter. Not every track nailed it, but the cumulative effect of each of the raw-ass 90-second marvels on this CD is awesome. Like The Dwarves or early Meat Puppets, these guys had a knack for ending some of the more bonzai tracks extremely sharply, almost like the tape machine just flipped off in overloaded surrender at the precise moment, except The Oblivians were wont to turn up that very last chord higher than the ones before it (“And Then I Fucked Her”). Too much. This is the first band I know of to pack every friggin’ recording track with maximum squealing volume and noise, so that each 45 came out sounding like a lo-fi and a hi-fi masterpiece at the same time. This method has been aped countless times since, starting with the Rip Off Records bands and some of the Japanese heavyweights like Teengenerate who followed. My only complaint to this day remains the look-ma-I’m-a-soulman vocals of Greg Cartwright, but A.) he only sings on a portion(maybe half?) of the tracks, B.) he’s actually had a great raspy shout when he wasn’t overdoing it, and C.) he’s toned it way down in his smoking new combo the REIGNING SOUND (who I’m just becoming acquainted with & really dig what I’m hearing). Seeing the Oblivians name for the first time today? I heartily recommend putting your mitts on this one to get going.