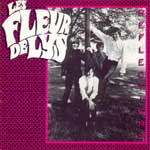 A middleweight in a sea of 60s UK maximum R&B/”freakbeat” reissues, one that I’d strongly recommend if, say, fifteen of the 24 tracks had been shorn without a second thought. You may be most familiar with these guys from a variety of after-the-fact compilations, not the least of which is the “Nuggets 2” box set which includes the overwrought but smokin’ hard mod cranker “Mud In Your Eye”. Then there’s “Circles”, better known to the WHO nation as “Instant Party”. I’m not certain who was on the idea first (pretty sure it was The Who), but it’s a masterful arena anthem on the level of THE CREATION’s “How Does It Feel (To Feel)” (and that’s pretty masterful!). LES FLEUR DE LYS recorded with multiple line-ups during their existence in 1965-68, and it shows. What was once hard-edged and raw guitar acid-psychedelia or mod pop (the aforementioned, “Tick Tock”, “Sugar Love”) ultimately gave way in 1967-68 to some yawn-inducing, toned-down PROCOL HARUM piffle and some cringeworthy Stonehenge-like druid rock. The band’s top moment, in my opinion, was a shredding one-off 45 they recorded with SHARON TANDY called “Hold On / Daughter of the Sun”, both of which are thankfully included here. I wrote about “Hold On” last year on this site, and the flip, while not nearly as intense, is still explosively rough-edged and well-produced, and totally deserving of a place in your MP3 folder at the very least. There’s something to be said for collecting as much of a footnote of a band as anyone could stomach onto one 74-minute CD, but as far as listening to every track goes – well, I’ve martyred myself on the thing in full, so now you don’t have to.