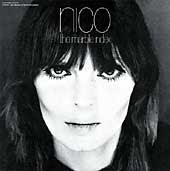 I read some pundit somewhere blathering about how if there’d been no Velvet Underground, no one outside of a few friends would have ever heard/cared about NICO’s music nor her heroin-gobblin’, Baader-Meinhof-lovin’ teutonic beauty (outside of Fellini and Warhol, perhaps). It’s hard to effectively rebut it, to be honest, but I suppose it’s a good thing the situation never came to roost. I’ve owned & listened to her first LP “Chelsea Girls” for so many years yet have always been tentative about digging much deeper into Nico’s records, knowing full well that there are a boatload of “Marble Index” partisans out there who describe her second record in rapturous terms. I thought it was high time I gave it a try, particularly in light of the new Sundazed “180 gram vinyl” reissue of the record (though that’s not the version I now own). Sundazed calls the 1969 record “the gurgling headwaters source of goth rock” – not something I really pondered while listening to it, but hey, I suppose. What I do hear is an initially off-putting but ultimately inviting mix of weird symphonic scenescapes, sparse accordion and violin arrangements that have an obvious “John Cale” stamp on them, and other non-rock instrumentation (“harmonium”! “Indian pump organ”!) creepy-crawling forth.

What, you call that sort of thing Chamber Prog? Ewwww. I like it a lot better than that. “The Marble Index” is a record that I imagine makes more sense from a critical perspective than in a listening sense – it’s downbeat and shimmeringly, depressingly opaque enough that I’m near-certain it’s not something that’s still hitting multiple turntables every Friday night (apologies if you spent last Friday night sobbing alone to this one). There are some really absorbing moments, though, particularly the dark beauty of “Frozen Moments” and “No One is There” and the hopeless paean “Julius Caesar” which grabbed me the tightest. I don’t know, Nico’s a polarizing one and I think her genius is still up for debate. I’m still getting used to cohabitating with this one & would appreciate a more informed perspective from those who either love or loathe the thing. Any takers?