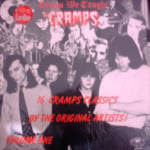 I was a high school CRAMPS fanatic, and feverishly searched out any & all vinyl, bootleg cassettes etc. that I could find and afford in the early/mid 80s. One curiosity that kept turning up, and that I never bought, was a bootleg LP called “Songs We Taught The Cramps” (pictured above), which featured some of the best originals for the many, many songs The Cramps covered up to that point (roughly the “Smell of Female” era). They were songs we all know & hold fast to our bosoms now, like “Love Me” by THE PHANTOM, “Rockin’ Bones” by RONNIE DAWSON and JACK SCOTT’s “The Way I Walk”. We now know these tracks so well not simply because of all the rock and roll excavation that’s been undertaken in the interim, but thanks to the fine “Born Bad” series of compilations that continued in the Cramps-roots vein for many years thereafter. Now add a fairly recent three-volume CD series called “Songs The Cramps Taught Us” , and put it at the head of the class. These comps are jam-packed with 50s and 60s rockabilly & garage oddities, obscuro-weird R&B and novelty tracks, and hard-as-nails instrumentals that haven’t seen the time of day in years. Forget that they’re all Cramps-related tunes, because the likelihood that you’ve ever heard the band play all of these is slim to none (unless you’ve been paying any attention to them since, say, 1986. I didn’t think so). Each volume pushes the maximum time allowable on a single CD, so on Volume One you get 31 raw tracks spread out over 76 minutes, with a 24-page color booklet to boot. Aside from numbers I was well familiar with, I’d give a special shout out for a hotshit instrumental from THE BUSTERS called “Bust Out”, which later became about 75% of the basis for “I’m Cramped”, and a great soul screamer called “Jelly Roll Rock” by WALTER BROWN & HIS BAND. Oh, and “Go Girl Go” by JETT POWERS, which is somewhat related to the rare Cramps b-side “Weekend on Mars”. Top-drawer stuff, and as fine an addition to your batch of 50s rockarolla as can be.