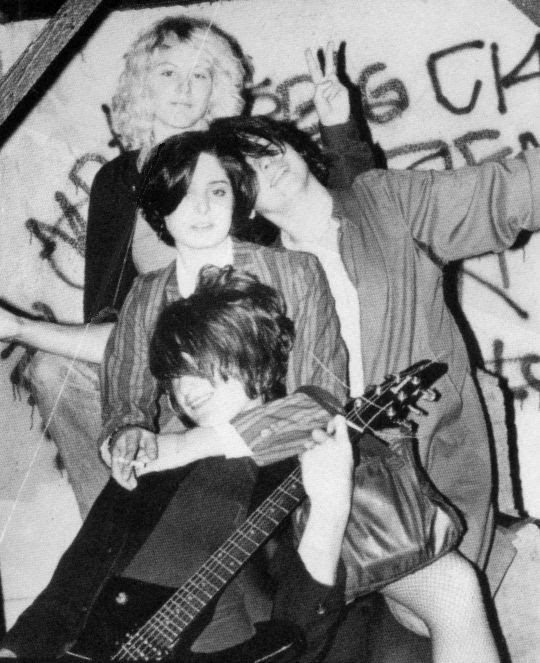 I'm forsaking the commoner's spelling of the band's name, "Redd Kross", in favor of the band's original, pre-threatened lawsuit moniker and the one that graced the first editions of this incredible record. You know, take a step back for a second here with me. We talk a lot about raw DIY masterpieces here at Agony Shorthand, records in which the relative lack of talent of the musicians & general bash-it-out spirit speaks louder and more forthright than records made by professionals in search of dulled edges and easy winnings. That said, why don't we bray about RED CROSS more often? It's not that I'm not a fan or even a newcomer to the early (1979-82) band's charms -- my two college radio shows in the 80s were called "White Trash" and "Notes and Chords Mean Nothing To Me" in honor of tracks performed by the stellar McDonald/McDonald/Housden/Lea lineup captured on this record. No, I reckon I've just taken for granted how genius this stuff is after listening to it ad nauseum for so many years. Whenever I'm asked for a list of my Top 20 albums of all time (which is never, but I'm ready!), I always have 1982's "Born Innocent" fired up and ready to go. Now I will proceed to impart several of my many reasons for having it loaded and at the ready.

"Born Innocent" saw a band in which half the members -- the very young but already veteran LA punks, Steve and Jeff McDonald -- were overcoming early teenage ineptitude and were learning to play fast, loose NY DOLLS-style cockrock, with the wild abandon and revved-up tempo of peers like Black Flag, the Descendents and the Circle Jerks. Stuck on the other pole were their new rhythm section recruits Tracy Lea and Janet Housden, two very young, musically unexceptional party girls who were chosen mainly for their willingness to take direction and party hard on a moment's notice with the McDonalds. You couldn't have asked for a better yang for the ying, if you know what I'm saying. "Born Innocent" is the fruit of this polarity -- a rollicking, shambling goodtime punk rock party record full of joy, bacchanalia and plentiful offerings to the garage/trash gods. No matter how often the subject matter approaches topics friendly to dark pop culture-obsessed 16-year-olds (Charles Manson, Linda Blair, "Beyond The Valley of the Dolls" etc.), you still walk away with an ear-to-ear grin and an urge to hear the thing again & again. Top representative moment that sums up the pituitary joi de vivre of the disc: the inept, three-second "bass solo" that pokes its head up for a nibble at the end of "Kill Someone You Hate". Love it. My favorite "cassette tape" for years was a side of a C-90 I titled "Red Cross - The Early Years"; it had their first EP, "Born Innocent" and every one of the many comp tracks made by the 1979-82 model(s) of the band: "Notes and Chords", "Rich Brat", "St. Lita Ford Blues" etc. Of these, the very best two are included on the CD reissue of "Born Innocent": the bafflingly named motorized screamer "Tatum O'Tot and the Fried Vegetables" (in which the band truly sounds like they can PLAY) and my all-time fave "Notes and Chords Mean Nothing to Me" -- a trite statement of purpose to be sure, but a killer harmonic punk rock song in anyone's book. That tape enlivened many a car trip for years, just as "Born Innocent" will your music collection -- indeed, your life -- when you click this link and order the expanded compact disc version today!