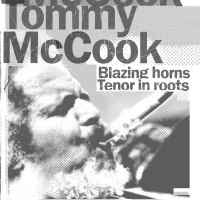 TOMMY McCOOK was an original saxophone-wielding member of 60s ska heavyweights THE SKATALITES before he lit out on his own, straight into the boiling cauldron of reggae fragmentation & experimentation in the 1970s. This very satisfying, all-instrumental Blood and Fire release is a CD collection of two of his late 1970s LPs, along with a small helping of odds and ends. McCook took a real jazzman's approach to his sax, so even while he's blowing over echo-laden dub or peppy roots reggae, the guy sounds like he's teleported himself to a smoky Village Vanguard stage. His hornlines are deep and soulful, in stark contrast to the staccato bursts of horn you hear in the Skatalites or in most 60s ska and rocksteady. Album #1 was, of course, a 1979 effort called "Blazing Horns" -- its centerpiece is right there from the get-go on track one, the 8-minute+ "Blazing Horns (extended)", a stupendous dub workout that's less about trippy effects and heavy reverb and is instead a cascading series of solos laid over some deep low-end rumble. The record features Sly & Robbie on rhythm, almost always a trademark of quality, and is predictably pretty first-rate. Also ace is the never-released "Tenor In Roots" LP set down with producer Glen Brown; this eschews the dub and goes for more of a vocal-less roots reggae vibe, with a little bit of old school ska creeping into the mix here & there. Rather than throttle the listener with blips, blurps and effects, this release goes down smoothly and is a pleasant way to acquaint oneself with a guy who had his fingers in the Jamaican musical pie longer than just about anyone else.