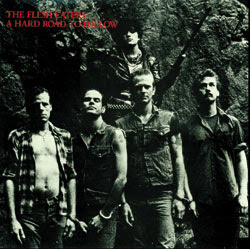 We're 3/4ths of the way there, folks. After decades in the wilderness, a time in which none of the almighty FLESH EATERS' four major works were available on CD and therefore available for instant canonization by a new generation of metal/punk howl lovers, we now have "A Minute To Pray, A Second To Die", "No Questions Asked" and "A Hard Road To Follow" out and available for purchase immediately (if not sooner). Thanks be to Atavistic and to Byron Coley for making it happen; now we'll all sit patiently on our hands for another few years until someone forks out some time and cash to get "Forever Came Today" in the bins. The reissues are something of a vindication for a band who, in their time, attracted a small posse of berzerkly partisan admirers, but who also missed a lot of potential converts who were either drowning in the plethora of great bands of the time; who couldn't get their hands on any poorly-distributed Ruby/Upsetter product; who perhaps were initially alienated by the band's over-the-top sonic power & banshee-like shrieks, or -- and this is probably the largest bucket of misser-outers -- were simply too young to get involved. I fell into the latter camp, and though I instantly clasped The Flesh Eaters to my heaving bosom only a couple years after these records came out, thanks to my clued-in older cousin (who like Coley & now like me has at one time or another called the Flesh Eaters his "favorite band"), it still bugs me no end that if only I'd been 2-3 years OLDER I'd have witnessed their ferocity myself. Stooges in 1970, Electric Eels in 1975, Bags and Crime in 1977, The Fall in 1981 and the Flesh Eaters in 1982-84 -- these are the shows I still need to attend. Maybe I will in heaven or hell.

So anyway, "A Hard Road To Follow" was the 4th and final album from the "initial" Flesh Eaters, and the only one that ever carried over the same line-up from the previous LP (in this case Chris D, Don Kirk, Chris Wahl and Robyn Jameson). Like its predecessors, it's a masterpiece of caterwauling punk rock, limned with the first hints of the boozy Stones-influenced blues and raw 60s soul that Chris packed up & brought to his next band, the DIVINE HORSEMEN (who I was lucky enough to see live). It's got some of the best "hard rock" songwriting you'll ever hear -- both in the "fantastic realism" of the fever-drenched lyrics and in the tempo-building complexity of the arrangements. Tracks like the superb "We'll Never Die", "Father of Lies" and "Everytime I Call Your Name" come on like heavy metalloid steamrollers, with a sort of rebel swagger that most bands could never pull off yet fit this pack of LA miscreants to a fucking T. In fact all of what was once known as "Side 2" is flat-out perfect -- in addition to the aforementioned, there's the jaunty alcohol paean "Fistful of Vodka" and the top-shelf pounder "Poison Arrow", all backed up with totally appropriate, soulful and deliberately muffled female vocals from Jill Jordan. "Rhymes" is a total oddity stacked next to this lineup of crunchers: a shambling, street-corner duet /harmonization between Chris and Jill that could have been performed by Marvin & Tammy or Ike & Tina if they'd come of fruit-bearing age around the Masque & Hong Kong Cafe scenes rather than in Detroit and Mississippi.

I can't in all good conscience give "A Hard Road To Follow" a full no-problems endorsement. This was the first Flesh Eaters LP (in four tries) that included a couple of mediocre tracks, in the form of "Side 1"'s "The Hammer Hits The Nail" and "My Destiny". It's almost stunning to hear any track by these guys that doesn't automatically pin you to the wall or send your emotional makeup in ten directions at once. If this thing's flawed at all, it's here, and that's not a whole lot to mar what is otherwise perfect. Best of all, the bonus tracks are just incredible. None are revelatory (translation: I had them all already) but all five rank among the top Flesh Eaters' tracks ever. "Lake of Burning Fire", a re-made "Impossible Crime" and "Hard Road To Follow" (the song) were once extras on the SST Flesh Eaters "hits" compilation "Destroyed By Fire", but that LP/CD appears to be long deleted. "Pony Dress", which many, including Coley, put as the apotheosis of Flesh Eaters glories, is also on here, as is a live version of the 8-minute soul-sucking firebreather "Divine Horseman". I see no reason for the band's name not to frequently breathed with those of the greats, nor to be horded as a special, you-wouldn't-understand record collector curio. Let's hope that the Atavistic reissue series is just what the doctor ordered in getting these guys over the hump in public consciousness-raising.