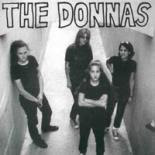 It's hard for me to deny that this 1997 platter just might be the svengali record to top all svengali records. Few will back me up on the claim -- I know this guy will -- but I could listen to THE DONNAS' debut LP anytime, anywhere, anyhow. It's a perfect teenage rock party from start to finish, and I chalk it up to one guy, the then-BRENTWOOD, former-SUPERCHARGER go-getter Darren Rafelli, who personally squired this band of high school girls, wrote all their songs, fashioned their gas-huffing, boy-crazy image for a few months, and then sent them sailing off to minor league rock stardom before he faded back, unrecognized and unrewarded, into the woodwork. The record is pretty much all his, and sacre bleu, I think his work here was as clever and as consistent as anything on "The Ramones" and "Leave Home". Not coincidentally, this album sounds like a sock hop-infused parody of those two, with riffs swiped with loving abandon and The Ramones' set-in-stone structure shifted ever-so-slightly to bring in more of a 1960s girl group sound. So when Rafelli/The Donnas tackle The Beach Boys' "Drive In", it doesn't stray in the least from the 1-2-3-4 template thus set. It's a very funny record, too, full of the sort of Bay Area peninsula in-jokes Rafelli made his stock in trade. Gratuitously namechecked in the course of this 25-minute marvel are South City (of course), CHOPE (County Hospital of the Peninsula), Happy Taco, the windswept beach town of Pescadero, and more. Sample goofball lyrics, all sung in a high-pitched, 16-year-old girl's voice:

Genius. There's also multiple 1990s high school tough kid words whose code I've not yet cracked: mano, rab and cheeba among them (I believe the latter is a reference to illegal marijuana cigarettes!!). But the young Donnas themselves aren't too happy with the lift their career got at the time. From the only article that mentions the Rafelli connection that I could find, five years old at that:

....WORST OF ALL, though, is the rumor that the Donnas were solely the creation of a Phil Spector-like impresario named Darren Rafelli, a Palo Alto man whose tiny label Superteem issued the first Donnas album. Thirty-three-year-old Rafelli first saw the Donnas as 15-year-olds when they were playing a gig as the Electrocutes--the girls' first band--at the Chameleon, a grungy club in San Francisco's Mission district. Rafelli had been writing songs for an imagined girl group, and he asked the foursome if they'd like to record some of them. At first, their parents were skeptical--what does this older man want with our daughters?--but after forcing the girls to bring a male friend to their first session, they eventually grew convinced that Rafelli's intentions were honorable. He wrote all the songs on the Donnas' self-titled debut album and collaborated with them on their second, American Teenage Rock n Roll Machine. He quit his job to accompany them on their first tours, both domestically and to Europe and Japan. But both Rafelli and the Donnas grew tired of the popular perception that he was some kind of Kim Fowley and the Donnas his latter-day Runaways, and so they parted amicably before the Donnas wrote Get Skintight. Though they're still close--they had dinner together before the Bimbo's show--the Donnas are battling the idea that they were his pawns. "People don't think that young girls can write songs," Robertson notes, "and so they think that if there was someone involved he was totally in control of everything all the time. We didn't write our songs for two years out of our six years as a band, which means we've written songs for four years. Now we're writing songs alone again. So if people want to keep making fun of us, they can make fun of those two years of our career."....

Fine, but your records after that first one were horrible, horrible, unfunny and horrible some more. I'd much rather make fun of them now! Meanwhile, I'd like to issue an APB for Rafelli himself. He poked his head out post-Brentwoods with a 45 I've never heard called "Donny Denim", but after that, no more. Along with Supercharger's "Goes Way Out" (which he had some excellent colloborative help on from Greg Lowery and Karen Singletary), this Donnas record is the guy's shining moment, one he can take to his grave as his gift back to the world. The original LP is near perfect, containing a baker's dozen of speedy, raw 90-second pajama party ravers; the CD's got all those plus their ultra-primitive, far less compelling early 45s. It's a world of difference between the low-fidelity micro-releases on Rafelli's own SuperTeem and Radio X labels and this classic LP a year later. Download "Lana & Steve" here and tell me you don't disagree.