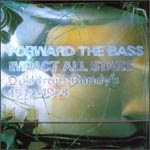 A pal pointed out to me not long ago that whenever I write about dub or blues, I might get one or two comments, but when I write about the rocknroll, the kids, they start talkin’. It may have something to do with a lack of credence when it comes to dissecting and recommending a genre like 1970s dub – I wasn’t there, I’m relatively new to the form, and like a lot of white critics, it’s easy to get carried away with any knob-twiddling bullshit when your critical faculties aren’t honed by years of careful study and observation. So when I put forth that the IMPACT ALL-STARS’ posthumous 1998 CD “Forward The Bass – Dub From Randy’s 1972-75” is the single best dub collection I’ve ever heard (and I’ve heard dozens!), you can take it for what it’s worth. But I’ve heard and ingested a lot of the heavyweights, and this intense platter even knocks them out. The first two tracks, “Jaro” and “Maro”, are the top singular instances of DUB as MUSIC, not studio manipulation. These two transcendent pieces are live-to-tape band pieces, and if you didn’t think dub could be played live, guess again. Once these two stunners reel you in, you’re in but good for a deep throwdown of heavy-breathing, low-end rumbling dub, this time with all sorts of studio effects layered over the proceedings. I’ve never heard anything like it, and I’ll tell anyone who asks to start here for a first dub CD. Let’s hear what the real experts have to say about it. From Konketsu:

“Less than 200 were pressed, almost instantly establishing its status as a lost dub classic. It's kind of a missing link, tying the radical experimentation of King Tubby, Scientist and Lee Perry with more conservative dub, low on effects and high on groove. What makes most of these tracks stand out is their superb instrumental quality, mostly laid down by the names you know and love--the Barrett brothers, Sly Dunbar, Augustus Pablo, etc. The rhythms and basslines are smooth and inventive, never cliched. The most extraordinary track is aptly titled "Extraordinary Version" and features haunting turntable manipulation over a minor key dub throb, spooky backwards voices spun hither and thither in warped motion--the original vinyl manipulators!”

Yeah, that’s the first “scratching” I know of, beating out the first three seconds of CRIME’s “Frustration” by a couple of years. From George Zahora:

“....this disc showcases the production mastery of Clive Chin during the heyday of Randy's Studio 17 (the Mecca of reggae and dub recording 'til the mid-seventies). Clive's dub style is distinctive -- each of these tracks has been stripped down to its barest essentials, leaving only those elements essential to the rhythm. In most cases that's the drums, the bass, sparse guitars, an infrequent dusting of other instruments and on rare occasions a few sound effects. The effect is a lilting, mesmeric tidal flow of rhythm and melody -- you might find yourself slipping into a trance, with or without the aid of controlled substances. Particular moments of brilliance include "Ordinary Version Chapter 3", which features the mock-dialogue between an aspiring engineer and his boss, and the syncopated harmonica of "Dubwise Situation", but really, the whole thing's just too dead cool for words and you'll notice new groovy bits each time you listen to it. Even if reggae irritates the living hell out of you, even if modern-day dub makes you want to blow your head off, Forward the Bass will win you over -- it's so simple, so archetypal, that you can't help but be wowed”

And if you’re keeping score at home, it’s a resurrection of an LP that was only pressed up with 200 copies, most of which surely never left Jamaica. There’s got to be more All-Stars dub damage out there. Does anyone know about this LP called “Java Java Java Java”? See, that’s the thing about early dub – sometimes the records were as obtuse and destined for oversight as anything on Fuck Off records or by I Jog & The Tracksuits. I remember my first pass at reggae in the early 80s – I’d scour many a bizarre sleeve, looking for the slightest clue for key information – like, say, what it was called, the name of the group, and the musicians who played on it. This one was lucky enough to get a second hearing, and if you’ve got the stomach for a throbbing, experimental and visionary piece of dubwork, this is the one.