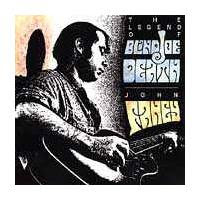 My first Fahey, bought on LP years ago, is still my favorite Fahey, though the expanded CD versions of "The Transfiguration of Blind Joe Death" and "The Dance of Death and Other Plantation Favorites" come awful close. This one was brought back to the fore because of a friend's toddler who falls asleep to John Fahey every night. He'd wrecked the CD I'd made them, as toddlers do, and I got it out to roast up for him one more time & therefore gave it a spin. It's no less revelatory than the first time I heard the record, and this outstanding CD adds in early 1959 versions of the 1963 and 1967 sessions that made it to the "stereo" LP -- essentially two complete LPs of the same set of songs. Fahey, who had up to this point in his young life been one of America's foremost blues obsessives and door-to-door discoverers of the 1920s-era pioneers, added his own name to the pantheon of dazzlingly inventive guitar players in a matter of minutes -- before track 1, "On Doing an Evil Deed Blues", is complete. His all-instrumental plucking and sliding is perhaps the best update of original recipe delta blues ever, putting him in a mood-creating league with his heroes like MISSISSIPPI JOHN HURT, CHARLEY PATTON and SKIP JAMES, while adding an intricate, almost professorial complexity to the tunings and scales. Something about a good John Fahey number: every strum, every chord, is rendered in rich, full, glistening detail, so that it continues ringing and echoing even as the next upstroke or downstroke or slide down the frets is complete. I don't know how he did or learned it, but this is a guy who could wring incredible depth out of a relatively simple instrument.

Hearing a weirdly-scoped track like this record's "Uncloudy Day" again this week helped me to realize the link between this early Fahey and his final experimental recordings from a few years ago. He was pushing instrumental guitar boundaries HARD even back then, while keeping them within the folk/blues "idiom" (as it were -- now I'm talkin' like a poindexter professor). The CD adds 10-minute wackjob called "The Transcendental Waterfall" which gives the best hint of Fahey's eventual move into more "eastern" guitar patterns, as well as a BLIND BLAKE cover. I think that just about any initial exploration into the multilayered universe of John Fahey recordings has got to include high points such as "In Christ There is No East and West" and "Desperate Man Blues", or you're missing some of the very best representations of what he was about & capable of. If you're looking for an excuse to get started, I urge you to strongly consider this one as you brave the man's extensive back catalog.