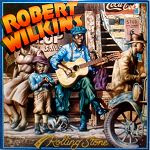 Somehow Wilkins got thrust into the second tier of 1920s-30s bluesmen despite a brief body of work that's among the greatest roots music every created. Amazingly, I came to his stuff 10-11 years ago not through the STONES, who covered Wilkins' "That's No Way To Get Along" as "Prodigal Son" on "Beggar's Banquet" AND swiped one of his other songs ("Rollin' Stone") for their name, but via the GIBSON BROS, who took on Wilkins' "I'll Go With Her Blues" on their final album. But Wilkins will evermore be known in popular culture as the "original Rolling Stone" thanks to the connection, and that's not a bad thing if it gets folks to buy this essential CD. His blues really weren't shackled down to the commonly-understood delta style of SON HOUSE, SKIP JAMES etc. -- more often than not, he played romping happy-face dance numbers like "Alabama Blues" or ringing, mildly complex mid-tempo numbers like the masterful "I'll Go With Her Blues". Wilkins also employed a couple of different vocal personas depending on the style he was playing. For his slower, more traditional blues, he played right out of central casting: mournful, lonely and distant. For the more peppy numbers, he sang in a bizarre froggy voice that takes some getting used to (but no more than James' falsetto). I've always thought that some rock band ought to tackle "Old Jim Canan's", one of the most bouyant and joyful "blues" ever created. Old Jim's sounds like the party place to be in 1935, a place where you could wile away the time "playing the dozens" and "sniffin' cocaine". It's still a gas to hear a full body of 78-rpm work like his scooped up and plopped onto one near-perfect CD, after years of having it scattered across innumerable compilation LPs. (By the way, take a look at the pictures of the LP comps in this link. Almost makes you want to click over to eBay and start searching, don't they?).