LINK WRAY AND HIS RAYMEN: "THE SWAN SINGLES COLLECTION" CD..... 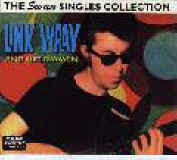 The old GIRL TROUBLE fanzine "Wig Out", had this saying on the masthead that I can't remember exactly, something about "What God could do in 4 chords, LINK WRAY did in 3" (if this was indeed the saying, I recognize that it doesn't make any real sense). The first wave of posthumous Linkmania was around the late 80s/early 90s, which is when I went and bought a batch of Wray compilations & when the great Norton "Missing Links" LP series began coming out. Then Wray toured a couple years ago, a tour that was most notable for the questionable hairstyle he was sporting (an Indian-style cornrow mullet down to his ass) and the questionable backing band he was porting (San Francisco "funny country" yokels DIESELHEAD). Another round of much deserved Linkmania ensued. Me, I kept wondering what else was out there worth getting beyond the first batch of Wray compilations on labels like Edsel and Rhino. I wasn't looking hard enough. This very worthwhile CD came out in 1997 on a UK label called Rollercoaster, and contains all thirteen 45s recorded by Link between 1963-67 for the Swan label; that batch includes some all-time instrumental favorites like "Jack The Ripper", "Run, Chicken, Run" and "Ace of Spades", as well as a small slew of raw and fuzzy obscurities like "Week-end", "The Black Widow" and "The Sweeper" (these 3 are incredible and well worth the high price of admission to this CD). Whether he truly poked pencil holes in his amp cones to get this overpowering, legend-making sound of not, Wray's guitar is a singular, you-know-it-when-you-hear-it presence. Not many guitarists can stake that claim, nor can they be said to pack the sort of career-spanning punch that Link's rough & tumble instrumentals did. Ditto for his best vocal numbers like his take on the gonzo, throat-clearing "Hidden Charms" -- an all-time raw screamer that deserves a seperate wing in the R&R Hall of Fame.

I'll tell you where this disc breaks down for me. Obviously Wray started to develop an itch for the charts around the mid-60s, to possibly bite a bit of the rock and roll fame apple that had thus far eluded him. Unfortunately this translated into instrumental & sometimes vocal covers of songs like "Please Please Me" and Dylan's "Girl From The North Country", much like BOOKER T & THE M.G.s also did to raise additional working capital. Unfortunately, they severely mar this otherwise fine collection, & if you never hear them, it's time you'll instead be able to spend bathing, grooming, or hooking up with loved ones. There is a 32-page booklet that I haven't invested the time to read yet (probably because I had to sit and listen to these terrible covers, and thus missed a few leisurely baths), but I'm sure it's chock full of info and helps explain away this less-than-glorious portion of his career. Thankfully these all cluster up near the end, and you can instead concentrate on the first two-thirds, which is just incredible. (All right, I just glanced at the booklet, and found that this label put out a CD of MICKEY LEE LANE called "Rockin' On...And Beyond". I need to know about this thing -- Lane's compilation appearances on "Too Much Goin' On!" and "Wild and Frantic" are some of the best wild, razzed-up soul of the 60s. Anyone heard this collection yet?)