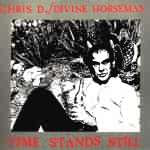 Another notch in the FLESH EATERS / CHRIS D. reputation rehabilitation underway over at Atavistic, and we're all indebted for their selfless servitude. After the Flesh Eaters made their final bow in 1983, Chris took a little siesta from ear-shattering rock and roll and settled in to write a nice cozy batch of folk songs. He gathered up a large collection of heavyweights from the multi-sharded Los Angeles punk/roots scene, many of whom were denizens of a late-night, hard-drinking, music-worshipping scene of their very own. Chris was something of a high priest within this group, as were Jeffrey Lee Pierce, Dan Stuart, Dave Alvin, John Doe, and relative newcomer Texacala Jones of TEX AND THE HORSEHEADS. All lent a hand on 1984's "Time Stands Still", and none went on to play in any live version of this band, for a live version of this band never existed. The purpose was solely to put music to Chris' words, and to create a landscape that fit in with some of Chris' favorite things: Mexico, drinking, Catholic guilt, sin and redemption, prayer books, drinking, and the love of a good woman. It also marked the debut of Chris' then-good woman, Julie Christensen, and although Julie's "I'm a lovely honky tonk angel" voice sometimes grates on me, here she provided an able foil to his various yips & yelps and guttural growls.

The album very deliberately stands in marked contrast to the overpowering Flesh Eaters records that preceded it. Here you have unabashed sentimentality worn on the sleeve of a man who's already starting to realize he's seen it all in the past 8 years. When Chris fires up his pipes for the great title track or for the jaw-dropping "Little Sister", you hear a weariness not present in any previous recordings, and it totally suits the languid, laid-back feel of the music just fine. "Lilly White Hands" has been a favorite of mine for years, and it provides something of a downer contrast to the preceding track, "When The Rain Comes Down", which is a light and airy salsa number for a scorching Ensenada evening. After this one came out to general indifference in '84, Chris and Julie reconstituted the band into a real touring unit, known to many and to all as the DIVINE HORSEMEN. This is the band I saw live in 1986, and they were superb. Those SST Records of theirs and the Flesh Eaters' masterpiece "Forever Came Today" are really the only Chris items remaining to be unleashed onto CD (I can take or leave "Snake Handler", but "Devil's River" should be next on the list), and that's a welcome spot I'm happy to find the discerning music world in at the end of 2004.