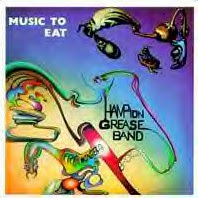 A long Econoline van trip around North America with the members of CLAW HAMMER in 1993 introduced me to this little slice of dixie-fried American rock and roll lunacy, and I've pretty much been the better for it ever since. "Music To Eat"'s stature grows every year as more and more up-and-comers hear it, ingest its influences, write things about it being the worst-selling major label LP ever (not quite accurate, but close), compare it to the MAGIC BAND (right) and LITTLE FEAT (maybe), and then sell it back to the used CD store after roasting up the couple of good tracks. The Claw Hammer guys, they flat-out loved this thing, and their screaming cover of "Hey Old Lady and Bert's Song" put the Hampton Grease Band on a few hipsters' lips for a couple of months around 1989. But let's not kid ourselves -- 1971's "Music To Eat" is no masterpiece, nor is it something I'd recommend to everybody, nor is it listenable in its entirety without great swatches of frustration, anxiety and bemusement. For years I've held onto the notion that the 2-LP/2-CD set really only had two for-the-ages classics: "Halifax" and "Hey Old Lady and Bert's Song", and the rest were a little too self-consciously daffy or trending toward what we now like to call "jam band bullshit". It's a hard notion to let go of, based on the evidence I reviewed the past couple of weeks, but the Grease Band at their best still ranked as one of the more clever and musically inventive early 70s hard rock bands, particularly from the South (Atlanta in this case).

"Music To Eat" starts off with what might just be the single best 19 minute, 42 second song ever created. Ostensibly about the city of Halifax, Nova Scotia, rumor has it that the band selected it based on the old blindfolded pin-into-the-map trick. The lyrics read like a combination Canadian travel brochure/history lesson created over a bongload of really good weed, and they're delivered in the exceptionally bent jester/pirate/mad scientist voice of Bruce Hampton. Song cycle-loving Johnny- and Jill-come-latelys such as my favorites the FIERY FURNACES are still learning from the twists and turns this number takes. It's a good 7 or 8 killer songs wrapped up in one, full of frantic fretboard runs, an outrageous stop-start guitar solo, loads of homegrown Beefheartisms, and a heartbreaking melody at its start and finish. It's a frostbitten sea shanty for the ages, and I'll play it every 3 months on my headphones until I die. The problem lies in the other three megasongs on this collection, the fusion-filled 19:31 "Six", the decent but too laborious 12:28 "Evans" and the 20:10 "Hendon", which also has some crazy moments and some great playing, but man, if you can stick with this all the way through you're a better woman than I. 20 minutes! I mean "Halifax" is long but it isn't 20 minutes, you know what I mean? That's 52 minutes of filler, and that's a little hard to stomach. Thankfully there's one more reward if you hang in through this & keep your patience up.

"Hey Old Lady and Bert's Song" is what will bring you in for good, and make your happy feet take off in diametrically opposed directions. It's a straight-up 45-friendly 3:22 rocker, nearly perfect in every regard, and wacked-out enough to sound like nothing else. It's really dirty, raw, messy and yet joyous Southern boogie rock, minus the boogie. It's another of my favorite rock songs, ever. I'll rack and stack it next to HACKAMORE BRICK's "Oh! Those Sweet Bananas", the STOOGES' "Down On The Street" and the VELVET UNDERGROUND's "Rock and Roll" for early 70s 45rpm-friendly classics, though I honestly don't know if it ever actually made it onto a single, and if it did, I do know that no one bought it nor played it. So there you have it: two killers and a lot of strong moments spread out through a bunch of mediocre and maddening middlework. I hope you find a way to hear these two tracks immediately if not sooner, and perhaps you'll discover something in the remainder that I'm still out there looking to find.