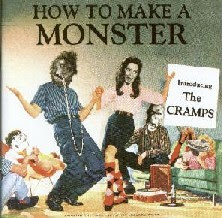 In the spirit of full disclosure, I passed by this collection on the racks for many months because I was certain that it was a new (i.e.post-1985) CRAMPS release, which meant that it was targeted for the pseudo-greaser demographic who attend hot rod shows in Orange County, along with the much-coveted tiki bar-loving psychographic. Then a few reviews hipped me to the fact that no, this 2xCD is actually a historical overview of the early Cramps, the Cramps that I cut my teeth on as a teenager, my then "favorite band" whom I credit more than any other for leading me into the music that's defined my musical life for nearly 25 years. So naturally I snapped it up. "How To Make a Monster" might be the best Cramps bootleg ever, outside of the knockout Alex Chilton sessions that turned into the unofficial "All Tore Up" LP that I still maintain is the single best Cramps release anytime, anywhere (including "Gravest Hits"!). Yet it's not a bootleg, but a Lux & Ivy-sanctioned official release.

Intriguingly, as a former Cramps bootleg collector myself, I have to say I've never heard a single track from any of these demo and live sessions, so they did a pretty swell job sitting pretty on these recordings all these years. The first disc is compiled in a "learning to play" sequence. You get the ridiculous "Quick Joey Small", apparently the first song the band ever learned, recorded at one of their first practices in 1976. This is followed by an assortment of later Cramps staples like "Subwire Desire" and "TV Set" that, while recorded well, are so fumbling and futzy that only the glossy sheen of pure rockabilly voodoo shines through, and hints at where they'd be only months later. As they evolved through 1976 and 1977, their sound got way tougher, and Lux began attacking the microphone in the manner to which we became accustomed. New drummer Miriam Linna (late '76) added that raw uber-simple thumping template that Nick Knox made famous (but didn't improve upon), and the band as we love them appeared to have quickly come into their own around October of that year, when early versions of "I Was a Teenage Werewolf" and "I Can't Hardly Stand It" were recorded & catalogued on these practice tapes.

While Disc 1's history lesson is worthwhile, it's marred by a kitchen sink approach which seeks to teach the listener how the Cramps came to be the wild band that eventually recorded duds like "Stay Sick!" and other shlock, including 4 takes on a track called "Rumble Blues" and 1988 demos like "Jackyard Backoff" (haw haw!!), recorded years after they'd shot their wad on their last good studio record, "Psychedelic Jungle". It's the all-live Disc 2 that'll keep you coming back, and I say this as a person who doesn't generally dig live records. It's got two shows, one recorded on January 14th, 1977 at Max's Kansas City in New York, and the other on January 13th, 1978 at CBGB. The first show displays a tentative but still obnoxious set of unrestrained rockabilly feedback hell, played for a crowd so bewildered & bummed that they heckle and cajole the band throughout their set. There might be 25 people in the crowd, tops, and though they don't know it, they're bearing witness to one of the great original bands of the late 1970s as they blossom in real time. Lux's excellent liner notes in this collection (filled with unseen band photos you gotta see, including the barely post-pubescent Ivy playing more-or-less topless guitar in 1975) make clear that The Cramps were dead serious in how they wanted their master rock plan to unfold: they, in his words, "We had a mission to move to New York and become the new New York Dolls....but we would include the most deadly ingredient of all: rockabilly". There's a version of "Love Me" on this one that just kills.

Where the first show on Disc 2 shows them meeting with bafflement, the second show from early '78 proves how quickly they were to win over New York City's fickle fanbase. Dozens of girls are screaming with raw joy after every single song, and if there's such a thing as actually being able to hear drunken dancing on a live recording, it's here. The band had progressed light years in mere months, and were a nonstop US trash culture wrecking crew, laden with fuzz and unbridled energy and an inborn ingestion of the best that low-end Americana had puked up to that point (including punk). It's a great fucking show, one of the top 20 or so I'd wish to be transported back to given the chance. So there you have it. Skip that $30 "Surfing in San Diego" red-vinyl disc and get this official thing instead.
posted by Jay H. at 11:23 AM