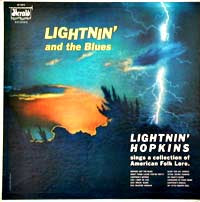 It appears that there were two very distinct phases to LIGHTNIN' HOPKINS' career -- the deep, dark, mournful sides he cut for Gold Star and other tiny Texas labels in the late 1940s, and the jaunty, mid-tempo boogie stuff that came after that. Not that the latter is middling by any means, nor was he to reside in that style exclusively thereafter. Hopkins' weakest partytime blues numbers destroy just about anyone's else best, thanks to his perpetually reverbed-to-the-max guitar sound and less than serious approach to singing & playing. It's a style 100% copped by other post-50s worthies such as HOUND DOG TAYLOR, among others. "Lightnin' And The Blues" is said to be one of the first blues LPs ever put on the market (as opposed to 78s), and the liners point out that "...a copy of that album in worth over $1,000 today". I found mine in a thrift store bin for 25 cents just last week....nah, a pal burned the CD version for me, a version that contains 4 extra tracks from the same April 1954 sessions that yielded the original 12.

I'll admit I'm partial to the earlier stuff. I've never heard electric blues as good as that displayed on those "Gold Star Sessions" CDs that Arhoolie put out in the early 90s, or that Kent reissued on LP in numerous forms throughout the 60s and 70s. (That said, does anyone know if my #1 favorite Hopkins tune, "War News Blues", exists anywhere on CD? If that song doesn't bring a chill to your spine, then no blues is worthy of the name). Whenever I hear any Lightnin' tracks cut after this time, they stand up nice and proud but just don't bring me down the way I want to be brought. Instead, albums like "Lightnin' And The Blues" display just when an understated virtuoso this guy was, and how, on tracks like "Don't Think 'Cause You're Pretty" and "Had a Gal Called Sal", he must've had rumps a-shaking from the delta to the Rio Grande every Friday night. As he got even better on guitar & gained more confidence as a singer, the more the lonesome and down-tempo numbers began to sound rote -- like copies of things he'd done far better earlier. But that's just what I think. Hopkins actually made his mark in the world on this material, and went on putting out solid sides for another 20-some-odd years after this. Of the post-Gold Star stuff, this is probably the best I've heard, which means even if it's lower down in this guy's catalog, it's way up high in the blues pantheon when stacked against his peers.