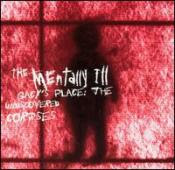 This might be the first Alternative Tentacles release I've owned since "Let Them Eat Jellybeans", or perhaps since the second No Means No record that I had for a couple minutes nearly twenty years ago. Now that my friend UE is no longer employed by the label, the long-lingering question can finally be spoken: Has there ever, in our time, been a worse record label than Alternative Tentacles? At least one that's survived this long? Can you imagine what torture it would be to have to listen to all the horrors this label has released since, say, 1981, in end-to-end order? I say this as one who parks his car in front of their offices nearly every morning before I hop on the bus, as one whose first 5-6 punk records were at least 50% AT releases, and as one who admires (I guess) the label's perseverence and willingness to do what they do. So it comes as quite a surprise to see Jello (of all people!) putting out one of the weirdest & most special punk rock records of all time, the MENTALLY ILL's "Gacy's Place/Padded Cell/Tumor Boy" 45 from 1979, along with other equally crazed tracks from the same session. For eight tracks and about 15 minutes, this CD can do no wrong. Totally sick fuzz-encrusted punk that motors along like a warp-speed robot coming straight for your children, with a vocalist who is 100% believable in his chosen persona of a complete, out-and-out lunatic. The non-45 tracks, like "Doggie Sex" and "Split Crotch Straight Jacket" are just berzerk. The original classics are classics. It's all good.

Then comes the rest of the CD. There are two more sessions included, and at least one includes the re-formed band in the 1990s or god forbid, the 2000s, and it's just a no-doubt-about-it crime against music. The vocalist, if it's the same guy, has lost everything that made his kook shtick perversely appealing, and it's not hard to picture him & the band as farting, armpit-scratching forty-five year old shlubs still cracking jokes about serial killers and retards. I'm usually heartily in favor of blowing up stereotypes by mercilessly mocking them, but what is Jello Biafra, one of the most self-righteous, politically correct left wingers of all time (he actually calls eBay "evil-Bay" in the band's online bio!), doing releasing a record with vaguely questionable Jewish slurs and songs like "Cum Twat"? The thing about this sense of humor is it's great to have one, but it really only applies when it's actually funny. Sometimes, as I'm sure you've found in your travels, people who aren't particularly smart like to defame or defraud this ethnic group or that gender in the name of being shockingly politically incorrect, but when push comes to shove they're just dumb-asses. Many, I'm afraid, are endemic to what we know as punk rock. The Mentally Ill were so impressively bent on their earlier stuff that I wish they'd have just put out a 15-minute 8-song CD of that first 1979 session. I'd have still bought it at $14.98 list, folks. And not sold it on evil-Bay later! (PS -- check out this review of the CD -- "for fans of the Cramps, the Germs and the Groinoids...". The Groinoids!!!).