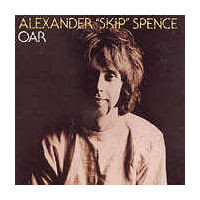 When I got a good look at SKIP SPENCE for the first time, in a MOBY GRAPE live TV performance of "Hey Grandma", he appeared like a vision of every cool-ass Haight-Ashbury hippie rock star rolled into one, the living epitome of the wacked-out righteous freak. Boss moves, boss goatee, killer nehru jacket, and even the band was great. A lot more together-looking than the towering "Skip Spence" of legend, the one who burned his mind and body on many mind-shifting chemicals & recorded this terrible-selling LP "Oar" while shuffling in and out of psychiatric institutions. I heard "Oar" once in college and instantly rejected it, and hadn't heard it again until this year. Once a curmudgeon, always a curmudgeon. Never cared how many hipsters' lips sang its praises; I know how those people operate. Someone of less than sound mind makes a weird record, and all of a sudden it's an "outsider" classic that operates on a different frequency than the rest of that fuckin' American corporate bullshit that everyone else listens to. Good news (for me) is that as my BS detector has sharpened over the years, my palate has also broadened, and what amounted to shambling drunkard's country-rock 17-18 years ago now sounds pretty ace. "Oar"'s far less bizarre and inaccessible than many have made it out to be; aside from Spence's cracked, musky, hollow voice (which is still great), what's so weird about this thing? It's a little loopy in parts, but mostly I hear some fine psychedelic basement Americana, true to the pre-war masters of the blues & hillbilly ethos while remaining firmly in touch with its own drugged-out era.

"Little Hands", the opener, was likely the 45 if there was one (too lazy to look it up), and I'm guessing that whatever FM airplay that "Oar" received back in the day was disproportionality tilted toward this sing-along, "everybody love your brother"-esque ditty. It's hella catchy, as we used to say in Cali. "Cripple Creek", which features Spence singing in a deep baritone that only the slugs and grub worms can hear, is a dark tale from the dark South, yet sounds so quintessentially San Francisco 1969 that I can see why it's one that always crops up in late-night discussions of the record, discussions that I have always had to recuse myself from. "Weighted Down", while a good hobo ballad, is itself weighted down by about three verses too many. Likewise with many of the other tracks -- some are just outstanding and instantly ready for near canonization ("War In Peace", the ultra-short 1:31 "Lawrence of Euphoria"), others just plod and wander and go nowhere slowly. But if this is the product of a deranged, mad genius, I sure can't tell. It's just a very good acoustic folk rock record from the hippie days. I might even play it again in 2 years!
posted by Jay H. at 7:30 AM