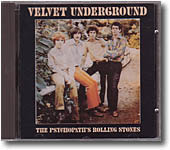 They told me that this was the one VELVET UNDERGROUND bootleg to get if I had to get just one, and you know what, I think they were onto something. "The Psychopath's Rolling Stones" is just as odds-n-ends as those excellent "Ultra Rare Trax" CDs and even as random as the official "Peel Slowly and See" box set itself, but it has got some incredible numbers & versions I've never heard elsewhere. Let's start with the definitive live version of "Run Run Run" -- for me, the most underrated Velvets song of all time and one that's easily in my Top 5 along with the other ones we all love. This one's a long version from February 8th, 1969 in New Hampshire, and as the back cover says, "features some remarkable guitar work". Remarkable! I'll say. The solos (Reed's?) are just blistering -- the song is transformed into the latter 2/3rds of "European Son" while still maintaining its bounce and chugga-chugga drive. Also revelatory is the demo version of "Chelsea Girl" recorded in those famous hotel sessions, just Lou and Nico and a beat-up old tape deck. That's my favorite song on her first record, and this version's better. Other hotties of note are a fire-breathing Cleveland 1967 "Guess I'm Falling In Love" (with vocals and another killer solo) and the 1966 tin pan alley studio outtake "Sheltered Life" that I've heard on other boots. John Cale on kazoo!

And what 70s-era bootleg wouldn't be complete without a hidden track not by the featured artist? This one's got one and a half: a warbling, half-insane live version of Nico doing "The End" (unlistenable), and a choogling 1920s-era jump blues called "Bootleggin' Blues" from someone certainly not from the lower east side. This collection is heavy on the first two VU records, so if the rough, sodom-and-gomorrah Velvets are your thing and you're pretty sure Yule's a fool, this digital platter of scorching obscurities is your ticket to hog heaven.
posted by Jay H. at 8:31 AM