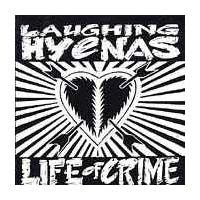 I tried to force a 21st-century reckoning with this band, one of my late 80s favorites, a couple years back, but I found the purging process difficult. If you can't hold on to your memories, man, your fuckin' drunk goodtime memories, man, well then what do you have, brother? But not reckoning with the sins of the past can certainly be painful later, so when a pal roasted up this twofer for me a couple months ago, I knew it was high time to speak truth to power (or whatever). In other words, the LAUGHING HYENAS are either a comically cartoonish "junkie hate noise" band from the AmRep/Your Flesh school of wank, or they were a streamroller of depresso drug blues with an incredible throat-ripping singer. Two years ago my thoughts were as follows:

"....Tough one here. Going on my pronouncements at the time, this was one of the best live bands I’d ever, ever seen – and I’ve no doubt that was true. They were a goddamn powerhouse, especially on the You Can’t Pray A Lie tour, with a caterwauling, bluesy heavy attack rooted in the Detroit rock-n-roll pantheon and extending into 80s giants like Black Flag & the Flesh Eaters. So why does listening to the records today seem kinda, I don’t know – silly? First, check out the lyrics. They’re godawful. John Brannon’s screaming? Still sounds raw and powerful, but heeey – my BS detector is starting to act up......"

When their first full-length LP "You Can't Pray A Lie" came out in 1989 I was already fully bought in to the band, having played the bejesus out of their debut EP on my college radio show. Their next LP "Life Of Crime" -- not so much. Their shtick had already worn a bit thin on vinyl, and the ratio of great-to-mediocre tracks had slipped so far that "Life of Crime" had maybe 2 semi-hot songs, with the rest being nothing short of completely unremarkable and unrememberable filler. But live -- hell-lo! I only saw them twice, but at the time I called them two of the best live shows I'd ever seen. The first time, I was trying to balance getting to the show on time with my crude machinations in courting a special lady friend whom I wished to become intimate with. As the night was winding down with no Old Testament-style results or relational progress of any kind to speak of, and showtime looming in minutes, I sped across town & bounded in just as the Hyenas launched into the show with a screaming "Here We Go Again" (then their brand new 45). It was cathartic, sweaty, loud, incredibly intense and left me virtually gasping at what I'd seen. Who needs girls after that, am I right? Can't remember much about the second show in San Francisco a year later except for their brutal version of the MC5's "I Want You Right Now", which brought the goddamn house down.

My run-through of the two LPs again on this CD brings up a couple questions: First, who at Touch and Go came up with the backward idea of putting a mediocre, more recent LP before a (far better) earlier LP? "Life of Crime" kicks this off, and by the time the somewhat dreary work of listening to it all the way through has been achieved, the pick-me-up wallop of "You Can't Pray a Lie" (especially "Love's My Only Crime", "7 Come 11" and "Sister") is seriously blunted. Touch & Go really blew it on the DIE KREUZEN CD, actually leading off with the spooky mersh metal of "October File" before the first album, which some folks call "the greatest hardcore record of all time" (and who talk about it way too much). Second, what's with all the screaming? Answer = if you've got holy pipes like Brannon's, you're going to want to show them off, and show them off he does. In NEGATIVE APPROACH, it was a hoarse but powerful yell; in the Hyenas it's a terrified howl from the depths of the charnel house, even when the subject in question is lovin' or huggin'. I guess I'm still a fan of this stuff, though it strikes me as kids' music at times. Like something that college DJs in the 80s might go for, but that adults should take in with a fair degree of skepticism. I sure can't let go of my attachment to the band 15+ years on, and I even dig Brannon's new act EASY ACTION. So there it is. What do the rest of the adults in the house have to say about it?
posted by Jay H. at 3:44 PM