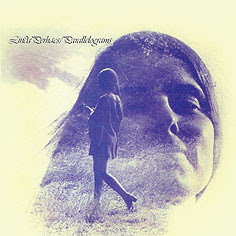 It's not like I go out looking for obscure 1970s female folksingers, right, but the hype on this one was so intense and well-described that I had to pick it up. You never know, she might be another VASHTI BUNYAN, who, now that I've gotten hip to her charms three years after everyone else did, has entered my pantheon of personal favorites. If you haven't heard "Just Another Diamond Day" and you think you can stomach some very fey frolicking female folk from the 70s, by all means get on the stick and pick that CD up! LINDA PERHACS? Hmm, not so much. Her brand of whispering-pines folk is not quite as easy to nail and has very often been tagged with the scarlet "psychedelic" letter, a tag often thrown on anything even remotely trippy or, more often, difficult to write about. Don't get me wrong -- I really like this CD and its shape-shifting, mood-swinging melancholy and laid-back 1970 art/stoner/hippie vibe, but there are not enough drop-dead revelatory moments on here to justify the rapture-and-riding of the four horsemen-type praise this reissue has received in other quarters. It's just a good lost record from the 70s, nothing more. Several tracks are, for me anyway, completely unbearable, including the opening wincer "Chimacum Rain" (which is on the reissue 3 times!) and "Morning Colors", but others are totally bent and beautiful, like "Dolphin" ("Dolphin.....take me with you...." -- how about that, rocker?) and "Porcelain Baked Cast Iron Wedding" -- not to mention the title track, which morphs into something so weird and jarring it's like the scene in Ingmar Bergman's "Persona" when the actual film stock just sort of melts and implodes upon itself before all the really crazy stuff begins. Folkies of the type parodied in popular depiction would certainly have had nothing to do with Crazy Linda and her druggy, psychedelic ways on the basis of this single track. And that's cool in my book of coolness. Perhacs only made this one record and a few demos that have been tacked onto the CD, and I think it certainly is worth an unjaded hearing if you get the gumption to do so.
posted by Jay H. at 6:03 AM