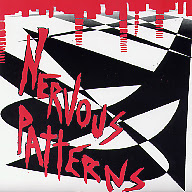 Early last week I was in New York City meeting with some potential Agony Shorthand investors when I got the call to meet some pals at one of their private residences. We sat around drinking the best $11 six-pack of cider you'd ever tasted, shootin' the breeze and laughing about the "good times". Well, one thing led to another and sure enough, someone had to pull out some records, and then it was off to the geek factory. One of us had an LP and a 45 by an early 80s San Francisco experimental death-synth duo called THE GERMAN SHEPHERDS. I remember seeing the LP around 20 years ago, but little did I remember that the band had an obvious and dare-I-say "extreme" & unapologetic fascination with young boys. The rumor is that this was no kidding around, not one bit, and that one German Shepherd actually went to prison for child molestation & then killed himself in his cell. Talk about really living it to the hilt, am I right people? Can anyone confirm this wacky story?....I was also played a POP GROUP track I actually liked, which apparently was the intention. It's called "3.38", it's a "rare, obscure OOP" B-side to the "She Is Beyond Good and Evil" 12"EP, and it is a shimmering, heavy-funk/dub percussive instrumental that I heard as super thick and aggressive. Hey, if this is what that band was about then forget everything I said, all right?

Texas' GOLDEN BOYS are a newish band who've put out one ace 45 to date, last year's "Got No Home / Slow Down". James Arthur from FIREWORKS and A FEAST OF SNAKES is involved so at the very least you gotta pay attention. The A-side is choking with vines upon vines of dirty feedback, covering up a very nice & messed-up slow blues tune. It sounds like one of the two guitars is still in the midst of tuning up, like the song just sorta "happened" & the band rolled with it. Great. Look for a new CD on hott new label Hook Or Crook just out.....Lexicon alert! My favorite new term to describe some awe-inspiring piece of music: "Dude, it's a total brain eraser". I've heard it uttered twice now & no doubt it fits a wide breadth of sounds, insanely deep dub for starters. Watch for this as hip new critical lingo in 2005.....Another crazy 45 I just got is from the NERVOUS PATTERNS, "Beautiful Brutal / You Can't Change". Imagine my surprise when I found that what I thought were a bunch of limeys turns out to be none other than "Jay Reatard" and his female doppleganger "Alicja Trout" (great fake name)! But wait, you're saying, that guy's a one-trick screaming lunatic, right? Wrong! Nervous Patterns are this twitchy, fragmented post-punk duo that have written two top-drawer movers, one sung by him (quite well) & the other by her. Think MISSION OF BURMA's "Max Ernst" or THE FUSE! for a more recent example. Growing up & developing a functioning bullshit detector never sounded so good! I'm slapping a "strong buy" on this one -- watch it zoom like Enron, baby!....That's all I've got for you today -- keep your feet on the ground etc.!
posted by Jay H. at 9:18 AM