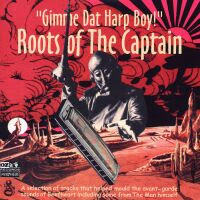 This is something of a new concept in tribute CDs: rather than a set of covers of an artists’ work, or a “Songs The Cramps Taught Us”-style selection of songs covered by the artist in question, how about a collection of songs that may or may not have inspired the artist, along with a smattering of numbers from the artist themselves? Hey, it works for me. “GIMME DAT HARP BOY” is a truly enjoyable and bizarrely hung-together cobbling of CAPTAIN BEEFHEART inspiration, be they items The Magic Band covered directly like BLIND BLAKE’s “Diddie Wa Diddie” or “Black Snake Moan” or tunes that simply rattled young Van Vliet’s world like CHARLIE PARKER’s “Koko”. The collection includes a strong helping of 1930s blues and gospel, as well as a few early jazz 78s. I haven’t read any Beefheart books (yet), so I don’t really know exactly how he came to be who he came to be outside of his California desert garage band roots (by the way, there’s a very interesting bootleg CD circulating called “The Early Years 1959-69” that’s got teenage Don recordings + some of the “Legendary A&M Sessions”-era outtakes). Certainly the compilers have responded to what they think are the man’s formative influences, stated or unstated. This also includes some of the wacky novelty stuff that reared its head throughout Beefheart’s twisted career, things like LORD BUCKLEY’s “His Majesty The Policeman” and “The Fang” by NERVOUS NORVOUS. Scattered throughout are minor Beefheart noodling tunes lifted from bootlegs, as well as non-sequiter comment snippets from the man himself. The two best tracks on here are a wild fiddle breakdown from UNCLE BUD LANDRESS WITH THE GEORGIA FIDDLE HAMMERS called “Rubber Dolly Rag”, followed by a wobbly “Tomi Tomi” from KANUI & LULU, Hawaii slack key guitar genius from the 78rpm era. Oh, and a crazy doo-wop R&B rave up called “Mope-Itty Mope” from the BOSSTONES, a must-hear. Don Van Vliet is a true American nutjob genius, and if you ever pictured him arriving fully-formed onto the planet with his addled brain as is, this collection begs to differ. Another check mark for the nurture over nature theorists.
posted by Jay H. at 11:28 AM