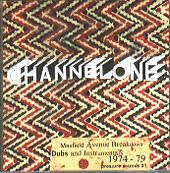 Top billing to Kingston’s CHANNEL ONE studio on this one, in keeping with reggae/dub’s fetishization of the studio itself. Secondary in billing if not spirit are the musicians who created the rumbling low-end framework for each of these incredible dubs (they're almost all dubs, not instrumentals per se), the REVOLUTIONARIES. These guys are the lords of 70s reggae, studio pros who seemingly made this music with one eyed cocked on the "versions" that might arise like black magic from the mixing desk later. Sly Dunbar, Robbie Shakespeare, Radcliffe Bryan, Ansel Collins and the whole crew were aided & abetted by the Hoo Kim brothers who ran Channel One. According to the liner notes, the b-side dubs/versions were really targeted for the sound system market, blow-your-ears-out systems that were the bedrock for ganja-drenched all-night clubs & heavy-lidded backyard parties. Imagine if you will dubs that just rip down into your lungs and clatter around your noggin with percussion absolutely exploding hither & yon. That's just on my car CD player; now imagine it on a mammoth DJ sound system at 3am when you're barely able to stand. Good times! My pal MM taped me two of the outstanding tracks on this, "Natty a General Version" and "Ragnampaiza Version" and I was out the door ten minutes later flipping through the dub section at the record store. The former has some wacked Spanish muttering, obviously by a Jamaican, along with car horn noises and bizarre squawks and bleeps of no meaning but with full effect. Also choice are the deep & nasty "School Days Version" and the "Rema Skank 12"", no relation to REMA REMA nor anything happening off the island at all. This collection is fantastic on all fronts -- 16 tracks, and maybe a mere 1 or 2 that aren't top o' the shelf.
posted by Jay H. at 9:11 AM