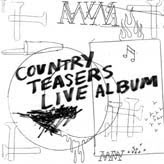 The broad, growing appeal of the COUNTRY TEASERS is tough to lay a concrete finger on, since I can’t honestly cop to listening to their records any more than once a year, best, and that’s usually whatever the newest one is. But I keep ‘em around, and when a new one pops out I’m always enthusiastically diving on top of it. Likewise with their live act – a slipshod, half-drunken, tin pan alley-meets-The Fall vaudeville revue with loud guitars – it’s always a pleasure, and has been since I first saw them years ago. Speaking of their live act, here it is, documented on the band’s first “live album” – about as far from Frampton and Grand Funk-style live records as they come. This one’s full of studio overdubs – or interludes, I guess you’d call them, that puff in where a poorly-recorded solo or break might’ve otherwise lost the listener. Often you can hear a tape deck whirring and clicking in, as some hastily-thrown together one-take studio riff is laid in during the time it’d normally take to smoke a cigarette or take a long swig of Watney’s Red Barrel. Even the fully live songs often sound spliced together from different gigs, so when the band’s doing RANDY NEWMAN’s “Short People”, say, you’ll get portions with lots of crowd noise followed by another where they might as well be playing Lubbock Veteran’s Hall on a Monday night. Singer Ben Wallers always sounds like he’s one drink away from keeling over while his band chugs away with the jounty, two-stepping garage skiffle, hoping it’ll all come together when Wallers regains his form. It usually does, which is why the Country Teasers continue to please at this late date. Forget that it’s a live record – it’s a merry, cut-n-pasted ramshackle mess of good time gigs from across the globe from a pack of wandering minstrel/nihilists/entertainers. What’s not to like?
posted by Jay H. at 9:38 AM