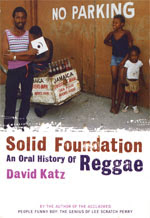 I figured I'd been a deep enough collector of reggae offshoots and precursors (dub and 60s rocksteady/ska in particular) the past half-decade that it was past time for me to learn something about the genre. This one looked promising, given that Katz was the guy (via the now near-legendary Grand Royal feature) that pretty much turned me onto LEE "SCRATCH" PERRY & who has served as Perry's official biographer and doppleganger for some years now. But the book's a stone-cold drag for the most part. Katz and his editors evidently felt it was extremely important to include the smallest morsals of minutiae (who played bass on which B-side; which producer worked with which engineer, etc.), and it's such a dizzying pouring-on of names and microscopic figures that the book quickly becomes a very difficult read -- or as I like to call it, a "skim". Which is what this turned into for significant chapters of this tome. (Don't worry, I read every page, I just didn't internalize every ridiculous detail).

An oral history should, to my way of thinking, be about the stories first -- oral stories told by the original participants, carefully pieced together in such a way that it captures the time/place and the essence of the "scene" like you'd traveled there yourself. As I'm sure you're aware, "Please Kill Me", and to a lesser extent, "We Got The Neutron Bomb" do this quite well with the late 70s NYC and LA punk scenes respectively. But Katz doesn't let the bazillions of Jamaican pioneers he chatted with do all the talking; rather, he does, while quoting them liberally and not quite well. He also quotes them in the Jamaican patois, which -- well, I'm sure I would've complained if he'd gone and anglicized it, but at times it's like trying to read an 8-year-old's book report. Katz's focus on the relentless recitation of trivia undercuts the whole notion of this being an "oral history of reggae", or a volume that lets anyone wanting to get into & truly understand Jamaican music have a chance at doing so. This is the way that so many jazz critics write, with an unnerving focus who played on what & what studio was used. I hung with it because I wanted to learn more about how dub became such a force in the mid 70s, and while I learned some new facts (did you know that the production of Clive Chin at his Randy's Studio of the IMPACT ALL-STARS' "Java Java Java Java" was likely the first true, full dub instrumental LP?), I also learned about what console KING TUBBY liked best, how often he rearranged his studio, and the 29 exact engineers he worked with in June 1976 (exaggerating to make a point, kids). It gets to be insufferable at times.

However! By sticking with this all the way through, I at least got a better sense of the hold that Jamaican music had on the British charts in the late 60s (some of the all-time great instrumentals were actually top 10 hits in the UK); how the great studio bands that backed up all the killer rocksteady & ska 45s really boiled down to like four -- Soul Syndicate, the Hippy Boys (Upsetters), All-Stars and Now Generation; and I even developed an ounce of respect for some of the more spiritual roots-based artists, even though I thoroughly can't stand that stuff. It's a long hard slog, though. I'd like to put a call out there, since I'm still a bit baffled -- where does one go to read well-written, informative prose about the less popular strains of reggae, dub in particular? This book might be a well-fitting piece of someone's lifetime exploration into the form, but as a starting point I'm giving it a big-ass thumbs down.
posted by Jay H. at 7:00 AM