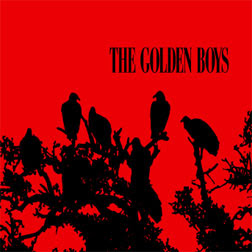 Debut full-length from new Texas trio anchored by the mighty "noisy rocking guy" James Arthur on guitar, a man undaunted by multiple broken bands and short careers -- he picks up the shattered pieces and applies his purring, unharnessed feedback machine to the next hot garage act he can muster, year in/year out. (Editor's postscript - Thanks to those who noted in the comments section that Arthur actually plays drums on this record. He's still a hot guitarist, and hey, so is the Golden Boys' slinger). The GOLDEN BOYS' first 45 was something to write home about for sure, and at times, so is this record. Take the first three tracks -- Happiness/Whiskey Bottle/Friday Nite. None sound much like each other, but in their ways, each brings forth a pleasing oderama of eau de CHEATER SLICKS, GIBSON BROS, 60s teen rock and the front porch bands of the Texas Hill Country. If you bottled these three onto a musk-scented EP and released that only, there'd be wet panties and briefs clogging roads from Spring Branch to San Francisco. Taking the Cheater Slicks pinholing a bit further, think “Forgive Thee” through “Yer Last Record”, not the bombs-away raw screaming stuff. Naturally, there's a bit of a letdown to follow, perhaps because at times the lyrics are simple beyond embarrassment (a quick coaching session from the Zodiac Killers or Radio Beats could help) or because a couple songs are middling-to-mindless. But you gotta stumble before you can walk again, right, and their cover of LEE HAZELWOOD's "Cold Hard Times" is spot-on, like if LARRY & THE BLUE NOTES did it with a fifth of whiskey in their bellies. These Golden Boys are not quite in the Cheater Slicks' rarefied league just yet, but they're working on it.
posted by Jay H. at 7:30 AM