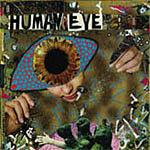 I got wise to the CLONE DEFECTS not too long prior to their split-up. Before I'd fully cracked their alien code and was ready to start following them around on tours, I heard they'd imploded, and main guy "Tim Vulgar" was already hitting the scene with a heroic new act called HUMAN EYE. This, folks, is them. Their debut on In The Red is better every time I hear it, to the point where it's now far past being a grower and is sitting perched at the top of the pile. The vocals were the best part of Clone Defects -- that and the KBD-meets-DIY art attack of the music -- and Mr. Vulgar's the same fella manning the mic here. More challenging and exciting even than his deep, Osterbergian set of pipes are the wildly bleeeeurping synths and careening oscillations that fill the dark voids all over this record; it's a panic-filled punk rock and roll record for sure, but one that's coated with a smoking layer of fuzzed-out analog grime that suits the hurtling songs quite well. Not like those candy-asses in COMETS ON FIRE; these guys actually know when to throttle back and kick out the jams without a bunch of dope-smoking improvisation & hippie histrionics. Top picks are the totally reckless stop/start track #2, "Episode People", and a crazed fuck-you toward the end of the disc called "Kill Pop Culture". Ballistic and ear-scraping, and probably a true hoot live. The screeching phaser guitars and synths may indeed remind one of CHROME, I reckon, but truth be spoken, Chrome only sorta rocked, much as I heart them. HUMAN EYE may not be hitting the bleary-eyed mysterious Chrome standard as of yet, but they're well on their way to being one of 2005's top newcomers, and are burying the needle in all the right places.
posted by Jay H. at 12:05 PM