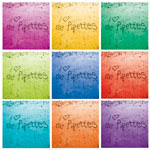 Who says pulse-rushing, mindless 60s-style girl pop is dead? I have to thank MH for leading me this UK act's way -- THE PIPETTES' debut 45 from earlier this year came and went in a hurry, and it appears on this evidence and from some "internet research" I've done that these vixens are quickly turning some heads and lifting some pant seams. They take their cues from JOE MEEK and PHIL SPECTOR-style productions, and even have a full-fledged manifesto to rationalize why their blowsy sugar pop bombast has legitimate cultural meaning. Me, I love it -- both tracks are 90 seconds of fast-moving pure saccharine, not that wimpy Splenda rock the twee kids are always pushing. "I Like A Boy In Uniform" is as sweet as the DOLLY MIXTURE's best work and nearly as dazzling. You can hear both sides as a stream on the band's website. I'm sure this could eventually get somewhat annoying if it were on endless loop on my iPod after having my legs crushed & arms brutally pinned to my sides following a massive subway terrorist attack, but for now it's the best light, frothy pop thing I've heard this year.

PS -- The second best light frothy pop thing I've heard this year is a 45 track from a lush British act called JOHNNY BOY -- "You Are The Generation that Bought More Shoes and You Get What You Deserve" (really). Like The Pipettes, this is booming 1960s-influenced girl group pop, & it's fucking great.
posted by Jay H. at 8:25 AM