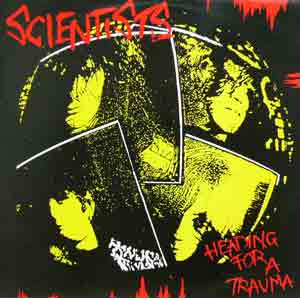 I’d never heard of THE SCIENTISTS until pretty late in their career, just a little before their final salvo, that “Human Jukebox” EP, came out. My friend Bruce was a total Scientists fiend, and once I caught wind of his record collection and all his obscure Australian 45s, EPs and LPs, I got on the case. The band was quite deservedly tagged with the scarlet “derivative” since their fuzz and growl was so close to the bold sound THE CRAMPS had made famous in the previous 6-7 years, but twenty years onward, it’s pretty obvious to me that nearly as many young bands cite The Scientists as a major influence, rather than going all the way back to The Cramps. (And yes, calling an out-and-out cover band like The Cramps anything but “derivative” themselves is probably wrong – being called “derivative” made Lux & Ivy stand up & bow). “Heading For A Trauma” was the first of several Scientists “greatest hits” collections, this one an Au-Go-Go peddled AU-only set that’s only made it to LP so far. A couple years later a US label called Big Time put out this radically remixed version of the record called “Weird Love” that set off lots of fuming and pouting at the time. Many felt that it was a watered-down version of what the Scientists were really about, and tamed their squealing feedback-driven roar to a tinny buzz. Later Sub Pop put out another, more properly-mixed collection called “Absolute Scientists” that I haven’t heard in years, but the kids seemed to like it at the time.

Listening to “Heading For A Trauma” today, I’m sorta torn. I do recognize how majestically raw this band could be at their best, but it’s becoming apparent to me that The Scientists milked their “demonic” sound a little too hard at times. Is it possible that the Scientists are just a little bit.....overrated?? Or that they rocked harder on paper than on vinyl? Kim Salmon’s devilish war whoops and mumbly vocal frothing sounds really silly at times, like some guy who’s shooting a video in which he’s dressed up as Satan (or worse, “Elvis from hell”). While it’s not the band’s fault, their recordings often were so muffled and uniform-sounding that what should have leapt off the grooves (at 45rpm, no less!) instead stayed put and just buzzed around a bit. Sure, there are times when The Scientists ranked with the greats – I’ll take anything off of “Blood Red River” or my all-time favorite track “When Fate Deals Its Mortal Blow” – but they sound more & more cornball to me every year that goes by. This collection threw together a few of those hot ones with relative turds like “Fire Escape” and “Psycho Cook Supreme”. It’s not where I’d start with these guys, despite it being a “hits” collection – just a little mediocre and clammy-sounding to be one to lust after. I’m not sayin’ I don’t dig The Scientists, folks – I’m just sayin’.
posted by Jay H. at 9:59 AM