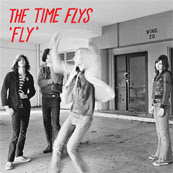 THE TIME FLYS have immediately checked in with one of the most satisfying releases of PUNK ROCK MUSIC this past couple of years. “Fly” follows on the heels of two very solid 45s from the past year & one-ups them with 11 tracks of super amped, energetic riff rock ramalama. The Time Flys don’t simply cover territory mined from the Velvets to the Voidoids, they instead jog sideways and burrow underground to motorized groups from DMZ & the REAL KIDS to THE HUNS and AK-47, with a couple toe dips into various branches of what the kids call “KBD”. You know what I’m talking about. They truly come off like something from another time, and even have a theme song (“Theme”) that highlights the harassment they encounter for their long hair. I witnessed some of this harassment at a recent show of theirs; these guys strut and preen and pretty much do everything possible to annoy folks with a louder/faster/shorter aesthetic, while simultaneously winning those same hearts with their 1978 vintage punk rock chops. Unlike the kid who threw his watch out the window, the Time Flys don’t keep it stupid-simple like so many balls-out punk retards – these riffs may be tough, but they’re also fairly complex and shift often. At times their sound approximates a low-fidelity FLESH EATERS ca. "No Questions Asked", and that might be about the nicest thing I've said about anyone this year. “Teenage Tears” is their ridiculous 50s doo-wop heartbreaker, done in the same sort of over-the-top raw “oldies” style popularized by SUPERCHARGER. It’s great. The rest are bang-bang-bang and over & out, and while reminding me of so many other bands, particularly pre-1979, these fellas might be the only ones playing original recipe punk at this tip-top level in mid/late 2005. Doubting thomases who scoff at moderne punk bands might be surprised to find they dig this one a whole hell of a sight more than most garage-based rock on the market. Listen to clips and see what you think!
posted by Jay H. at 8:43 AM