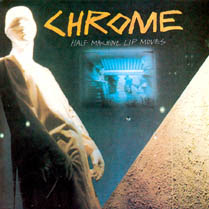 I'll admit to tossing off the word "CHROME" as lazy critical shorthand for dissonant, phaser-heavy, hard synth/guitar rock, despite only owning or even having heard 2 of Chrome's many LPs -- and the two that came easily & posthumously packaged together on a major indie rock record label (Touch & Go) at that. There are times when I've felt I've never given the band enough shrift, particularly when I crank up 1979's "Half Machine Lip Moves" and its overloaded, MC5-ish, Krautrock-spun space rock. I am quite certain this is the first time I've written even a sentence about them anywhere. I reckon that I heard from just enough people who knew their Chrome that it wasn't worth digging too deeply into the late 70s/early 80s San Francisco band's back catalog once you'd heard their two masterworks. So here we are. Maybe you haven't heard even those yet! It's a real dark and moderately difficult set to penetrate, but its key rewards are many, and are brutally cut, violently pasted & tape-manipulated all over the disc.

Starting off with the howling "TV As Eyes", it's easy to see how many cues were taken from some of the more boss early 70s groups -- the Stooges & the Motor City 5 in particular. But as the record builds -- and leaps from one idea to the next as tape is abruptly spliced into the midway point of some sonic jam -- you get the picture that these guys were also on a major CAN bender as well. Some real propulsive, groove-oriented space truckin' at times, albeit with nuclear-meltdown guitars & a general air of robot-led apocolypse and certain doom. "Half Machine" is a completely fried affair, and is just caked with distortion and the tuneful sounds of shorted-out electronics. I really dig it, and need to listen to it far more often than I do. "Alien Soundtracks", which is actually the earlier record (1978), doesn't grab me quite as much just because its experimentation only connects in parts, but it's still some heavy-breathing scuzz. Another fella on the internet says of this era of CHROME, "....Overall, the combination of screwy sound and art on a budget placed Chrome as something like West Coast cousins of early Pere Ubu and Destroy All Monsters....". Only a select handful of freaks really seemed to get much out of the band back then, but it should go without saying this CD belongs on pretty much everyone's shelf now that we've had time to review the historical record & get it right.
posted by Jay H. at 8:49 AM