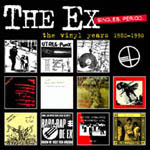 I took a flyer on THE EX for most of the past twenty years, having heard several of what were supposed to be their godhead LPs without any real cerebral registration one way or the other. The only exception was an incredible show I saw them put on in 1991 in San Francisco that knocked the socks off my ass; an abrasive, horn-honkin’, noise-bringing punk rock guitar feast. I thusly bought “Too Many Cowboys”, which was a fairly recent record, and sold it back with shame on my face within the week. Only 18 or so months ago, one of the readers of this very blog tried to bring me back into THE EX fold with CDRs of “Blueprints for a Blackout” and others, but I still found them all to be too strident, too bombastically heavy/scraping & just average when it came to lighting the internal flame. This new comp of their 1980s 45s and EPs, however, is the real deal, and hands-down the hottest thing I’ve heard from the band since that blessed show 14 years ago. All this time these Dutch treats were bowling over their working brothers and sisters across the globe & now I know why! Their earliest stuff definitely fits in with early MEKONS (“Stupid Americans” has the same shambling spillover sound as “Never Been In A Riot”) & barking ’78-‘79 UK punk/oi stuff, and is good-not-great, but right around 1982 this band started setting it on fire like you wouldn’t believe. “Weapons For El Salvador” (oh my god you guys that is like soooooo 80s!) and “New Wars 2” are way beyond par with anything subsequent American acts like BIG BLACK or COP SHOOT COP pulled off, and now that the pieces are falling into place, I can see just how much those two acts in particular were schooled by these hotshit EX 45s. The mid-80s EX, at least on these singles, were this skittering, creepy-flesh punk act that used a thudding, funked-out bass like other punk bands used guitar, and moved that guitar to a supporting role for pure noise damage and swirling, clanging effects. The winning run continued into the early 90s, when they put out the fine “Slimy Toad” 45, which came too late to make this compilation – but all told, it was a hell of a decade for the band on the small vinyl form. A more worthy reissue may be hard to come by this late in the game in 2005, and it’s so ace I’m newly invigorated to take a fresh look into those 80s albums again.
posted by Jay H. at 7:21 AM